Falconry Friday! How to Train your Dragon (Part 2)

Last week we used our Red Tailed hawk, Lily, as a model for training our (hawk-like) dragon.  Many of the same principles apply to training other raptors but there are plenty of differences across the common falconry species.  This week, we'll focus on those variations.

Dora Surveying the valley a few days ago 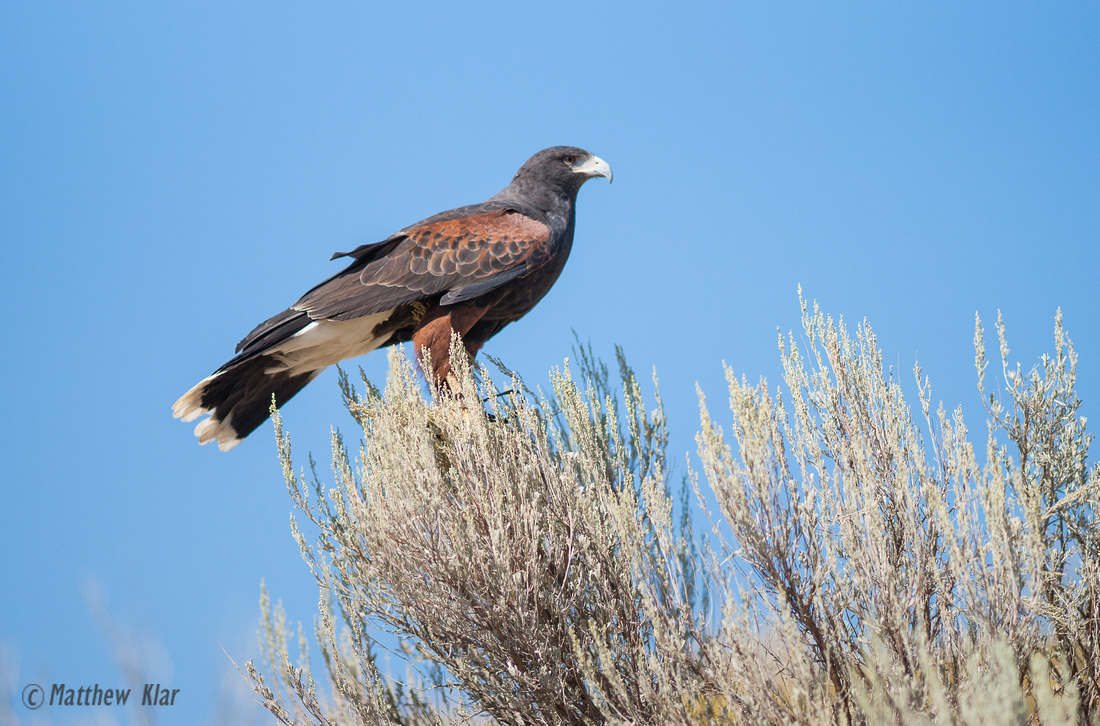 Harris' Hawks (at least the North and Central American sub-species commonly used in falconry) are unique in that they are the only social raptor - they live and hunt in matriarchal groups of 4 to 7 individuals in the wild.  This has several important implications to falconry:

-They should be pack-bonded rather than food-bonded to the falconer.

-They are naturally inclined to continue hunting until everyone is fed, ie., they will hunt at a much wider weight range than most raptors will.

-Their social nature often makes them a poor choice for a solo bird. Indeed, many reputable breeders will only sell them to a home where they'll be paired with at least one other Harris' Hawk. 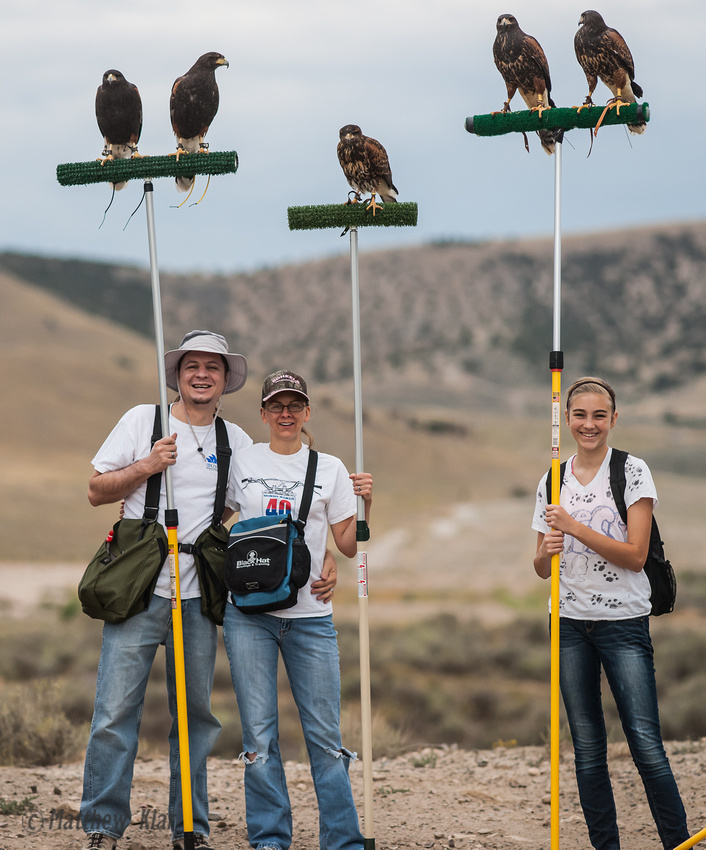 In many ways, training a Harris' Hawk is the inverse of training a wild-caught Red Tail - the Harris' naturally pack-bonds but doesn't know how to hunt while the Red Tail knows how to hunt but needs to bond with the falconer.

If we tried to make a Harris' Hawk go through the same steps we did with the Red Tail last week, we'd ruin her - primarily out of sheer boredom and resentment.  First of all, we form a falconer-hunter bond rather than a falconer-food bond right from day one. We never feed a Harris' Hawk off the glove - ever. The glove (or T-perch) is where we look for food, not where we get it.  We'll call the bird to the glove/T-perch, walk a few steps, then toss a food tidbit on the ground for her to pounce upon. 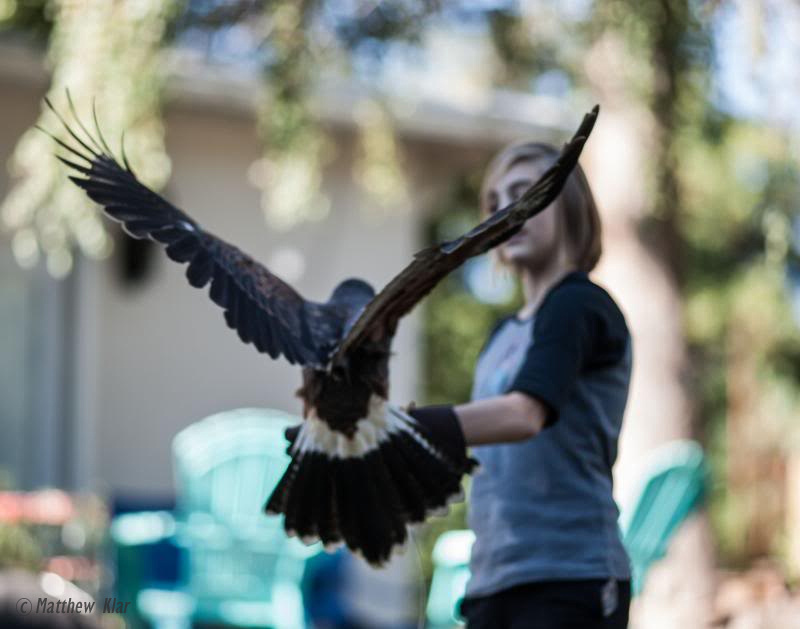 Once she's made weight and done this 2-3 times, training at home is over.  Quite literally a juvenile Harris' Hawk  should be flying at game in the field within 10-12 days of leaving the breeding chamber (compared to 30-40 days for a wild-caught hawk returning to the field).  No wasting time with exercises in the yard. Everything she needs to learn happens in the field. Besides, it's not like she's going to leave. As the adage goes:  "The only way to lose a Harris' Hawk is to drive home faster than she can follow..."

This is also true when restarting the hunt after the summer molt -- the Red Tail will generally require a refresher course of sorts the first year or two to get the kinks out but the Harris' Hawks are jessed up and turned loose straight into the field as soon as their weight comes down to anything resembling their hunting weight from last year.

Tonks & Dora, 13 days out of the breeding chamber: 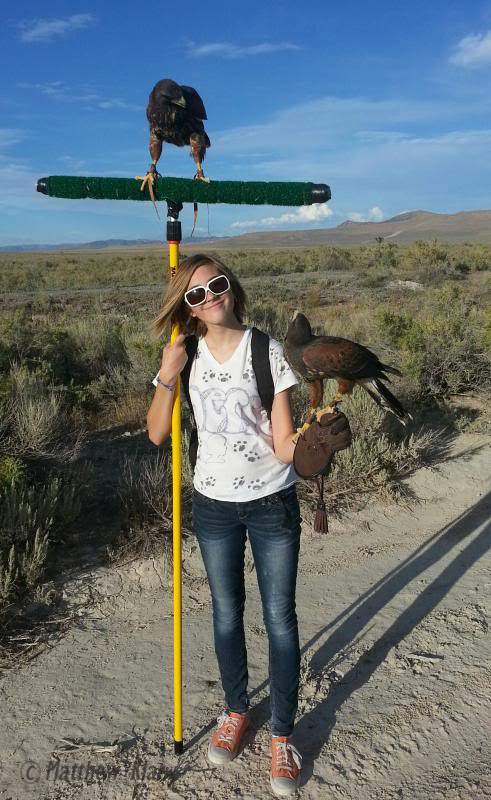 It took them about 100 tries over 10 days to catch their first rabbit but nothing we could have done at home would have shortened that learning curve a bit -- in fact, it would have only lengthened it. 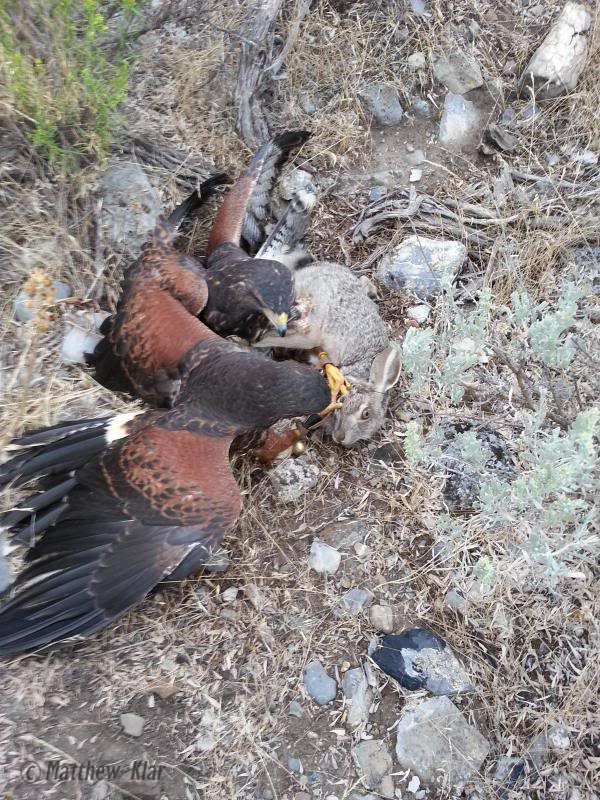 I haven't mentioned much about Accipiters like Goshawks & Cooper's Hawks because, frankly, they're just a great big ball of crazy and numerous books have been written about how they're different from everyone else, especially an imprint Accipiter.  However, a brief mention makes sense here as a segue into training true falcons as it allows us to introduce a new piece of equipment:  the lure.

Same Goshawk, in year one and two: 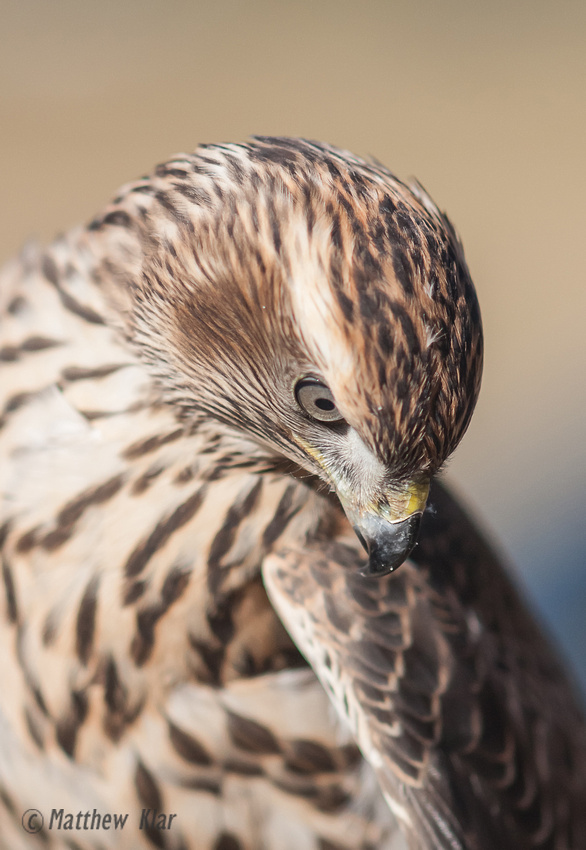 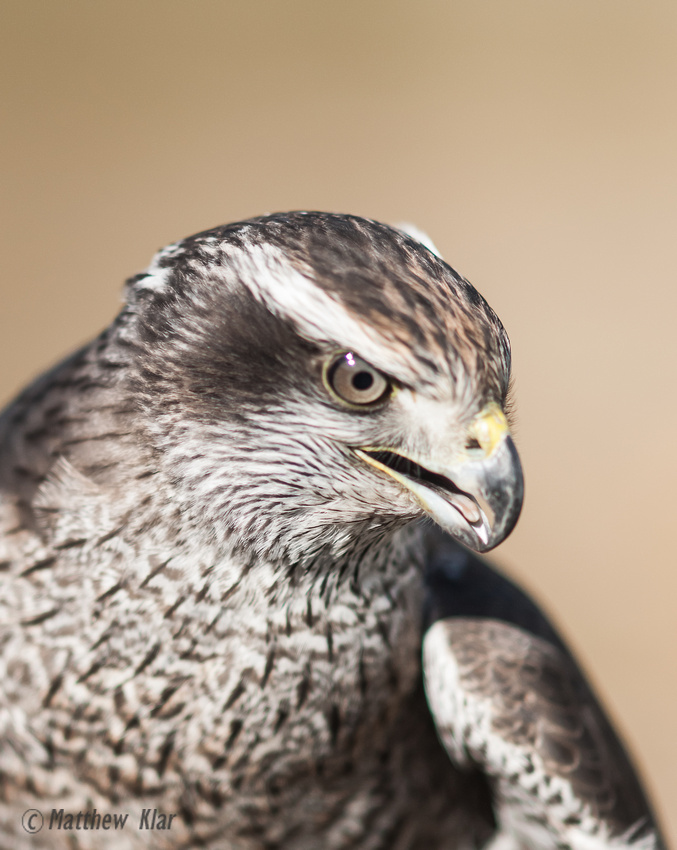 With the bigger hawks, the lure functions primarily as an emergency recovery device but with raptors that specialize in avian prey, such as the Accipiters and the true Falcons, the lure becomes a vital tool both for training as well as daily exercise and conditioning.

Quite simply, the lure is just a padded pouch of leather swung on the end of a string.  It can be (and should be initially) dressed up to closely resemble targeted quarry like a rabbit, grouse, or starling.  It should also initially have a loop to attach food but once the bird knows the game even a glove or hat tied to a string will do.

On the left a rabbit lure with rabbit hide underneath and on the right a starling lure: 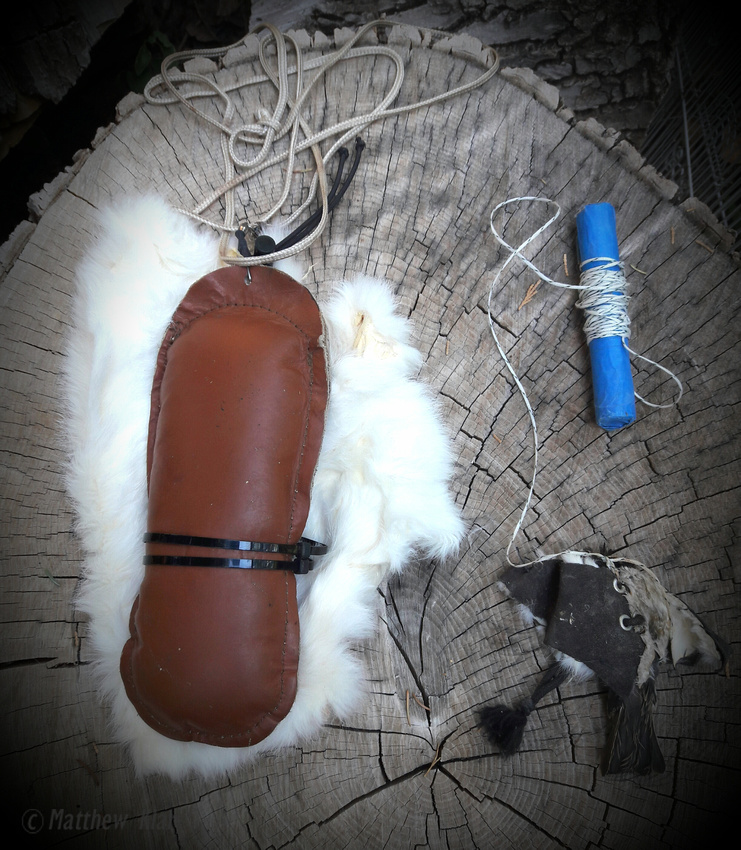 The avian prey lure can be swung horizontally, vertically, or in a figure eight pattern making it progressively harder for the bird to catch but care should be taken to mind the following principles:

-Train the bird to strike from upwind if possible (the falcon has a speed advantage going with the wind but less so into the wind, especially on a second pass).

-Train the bird to strike and stand on the lure rather than bop it and land nearby.

-Let the bird have the lure every time she hits it, gradually working on getting her to transfer to food on the glove.

-Fly the lure so that we're training her to chase and strike the lure in accordance with her species' natural tendencies:

for Accipiters, a short vertical lure rotation with the strike at the apex mimics a quick strike from behind and below, hitting on the upswing each time

for Gyrfalcons and Merlins, a long horizontal rotation with a sharp pull up at the end mimics a sharp, twisting dive and the abrupt pull up on the outrun they are so fond of

for Prairie falcons and Peregrines, a long, low horizontal rotation with a slower pull up mimics a longer, swooping dive from above. 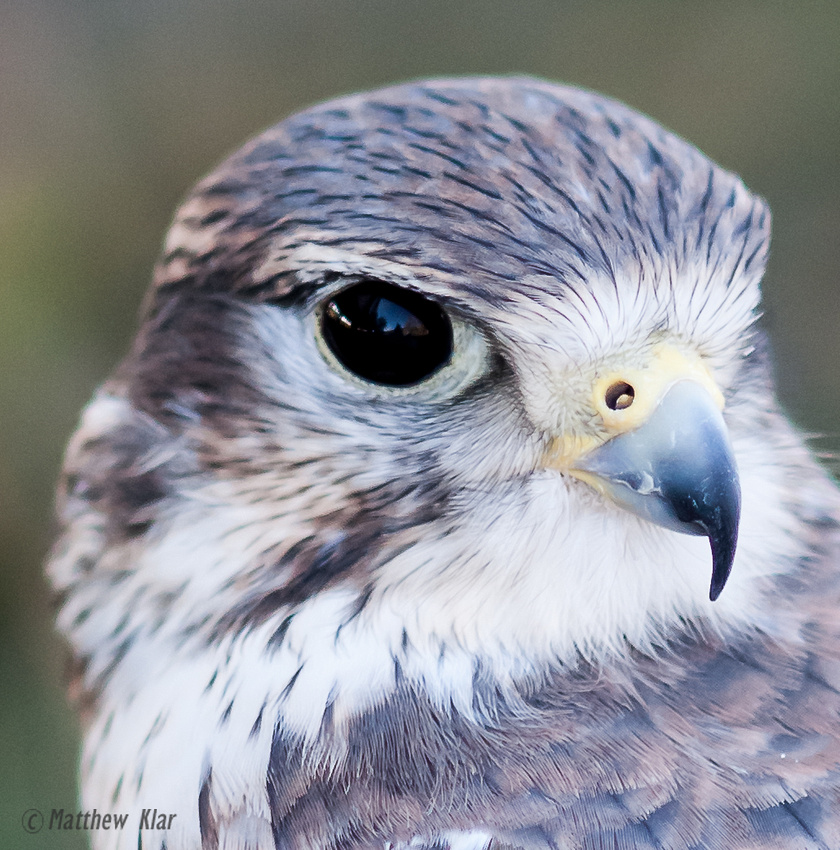 Accipiters are generally allowed to hit the lure each time, feeding a meal divided over six to ten stoops.

Gyrfalcons, Merlins, and Prairie falcons excel at lure flying and will enthusiastically make 75-100 runs with a full meal only at the end as lure flying closely mimics their natural tendency to make multiple short stoops while on the chase.

Peregrines, with their steep vertical stoops from great heights, are least amenable to lure flying as a sole means of training and will quickly progress to kite or balloon training (up next).

Here are two videos demonstrating lure flying, first with a Peregrine and second with a Lanner falcon:

Lure training is usually the final step in training Accipiters, Kestrels, and sometimes Merlins. However, in order to train the larger falcons to wait on high in the air above us, we need one more step:  kite and/or balloon training.  Yes indeed grasshopper! In order to get that straight down stoop from 500-1,000 feet we'll need to literally go fly a kite (good for training up to 500 feet or so) or even a helium balloon (necessary for training to wait on 1,000-1,200 feet up).

Prairie falcons tend to want to hang out around only 300-400 feet or so and have short attention spans. Gyrfalcons can be trained to climb higher but have even shorter attention spans, with a tendency wander away fairly quickly.  It's with the Peregrine (and Peregrine crosses) that this classic training and hunting style really comes into it's own. 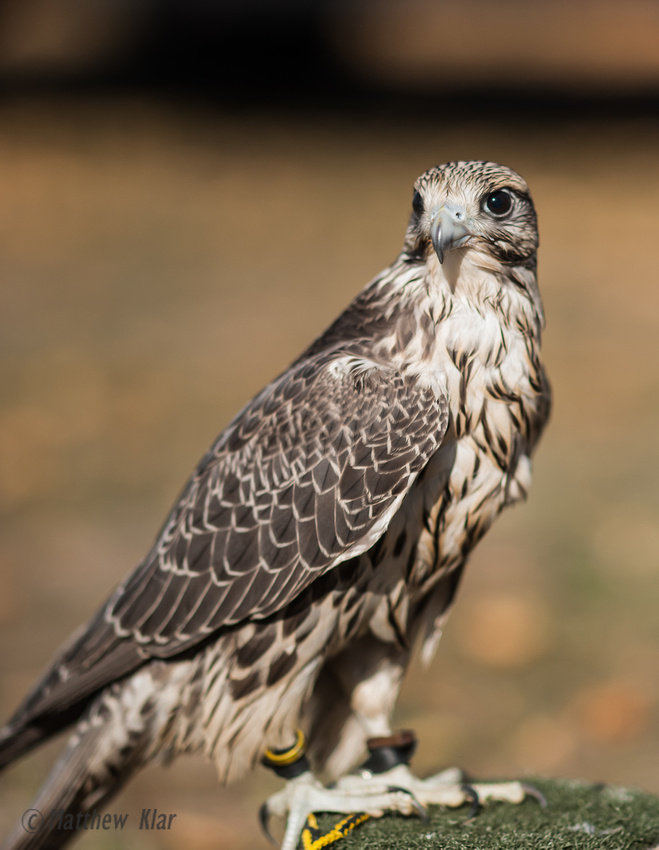 Okay, time for us to go fly a kite!  Using Caleb's Peregrine, Fighter Pilot, we'll first walk through a photo essay of how this works followed by a couple videos, shot both from the ground and from the kite/balloon. 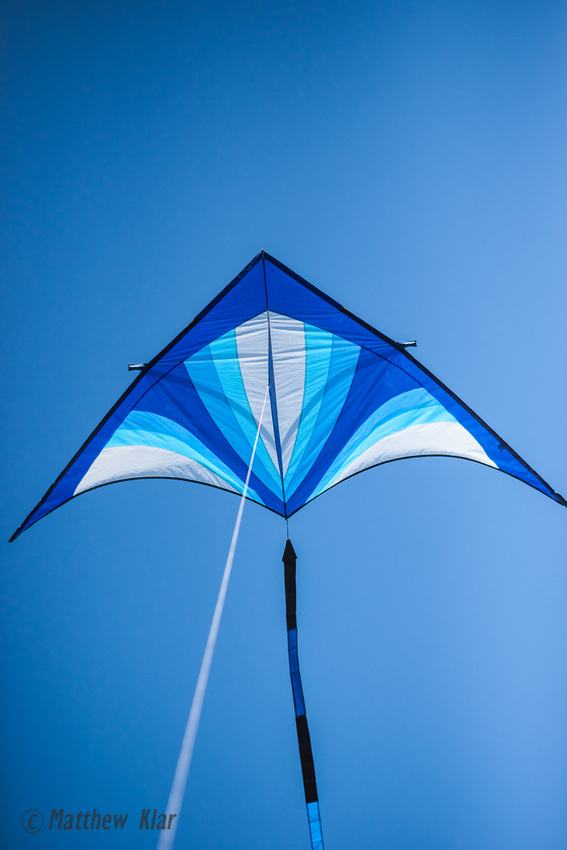 With 500 feet of main line marked in 100 foot increments (a drill or a winch is super helpful here): 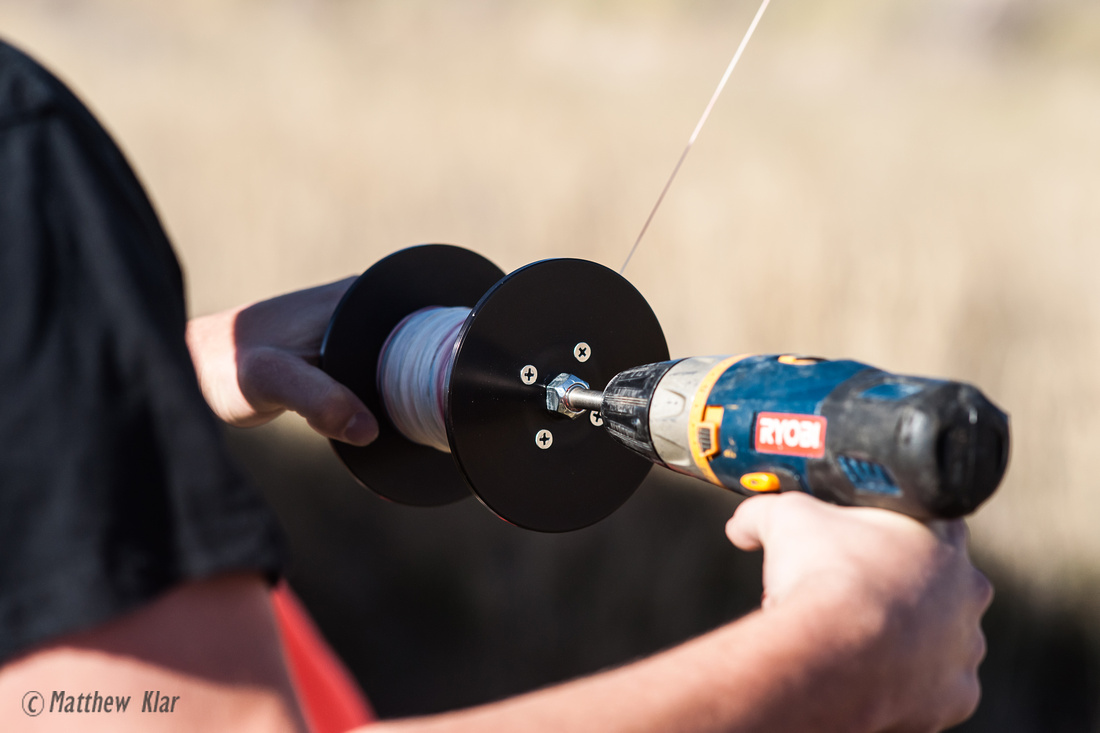 This whole method of training the falcon to go up to the height of the kite/balloon is based on having a food lure attached about 20 feet below the kite.

Here we see the lure leash with the food attached to the leather straps, the leash attached to the main line with a D-ring, and the apparatus held temporarily in place below the kite with a friction clip (a glorified clothespin, really). 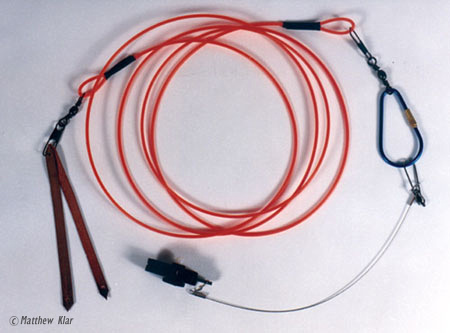 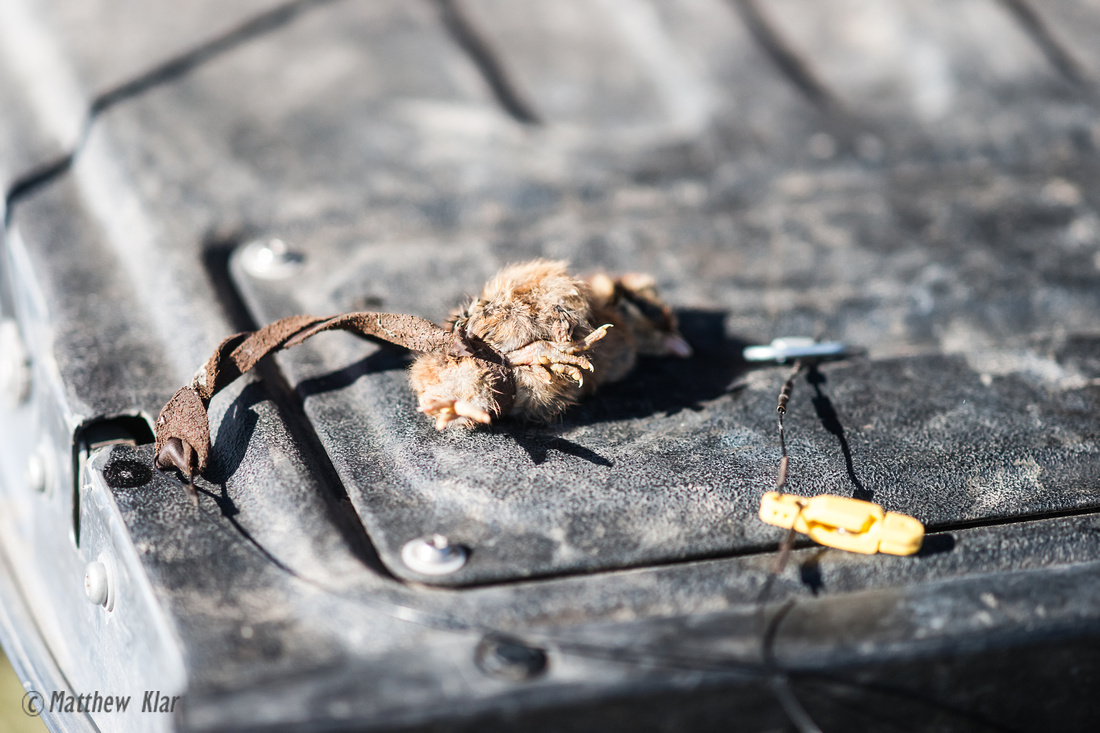 The lure leash friction clipped to the main line: 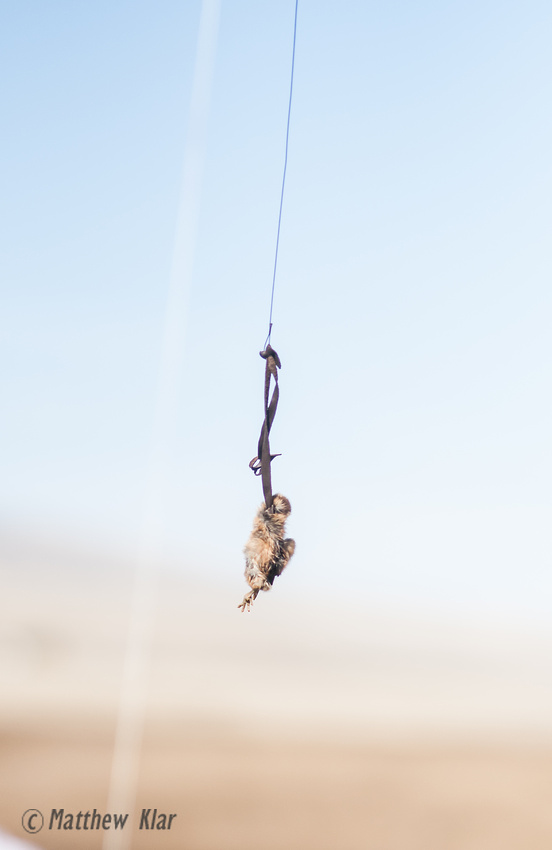 Up she goes (the friction clip is yellow in this set up): 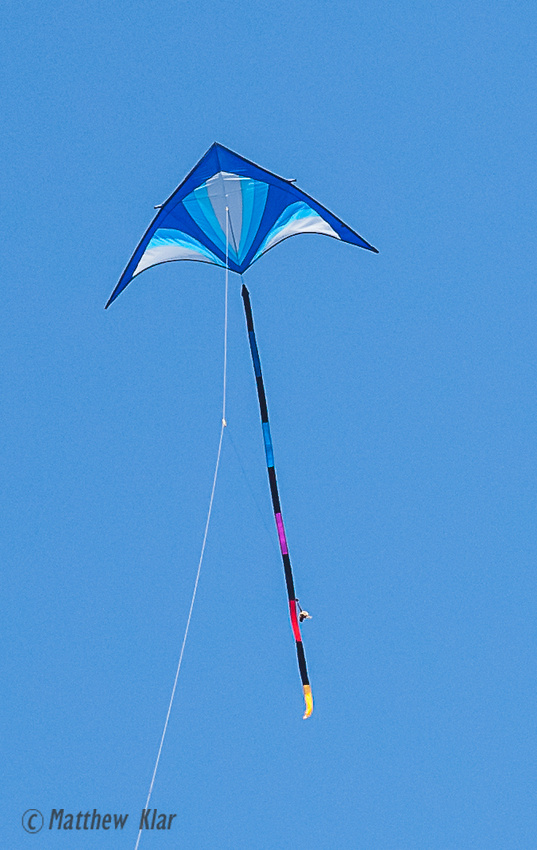 Once the kite is at the desired height, we send the bird up: 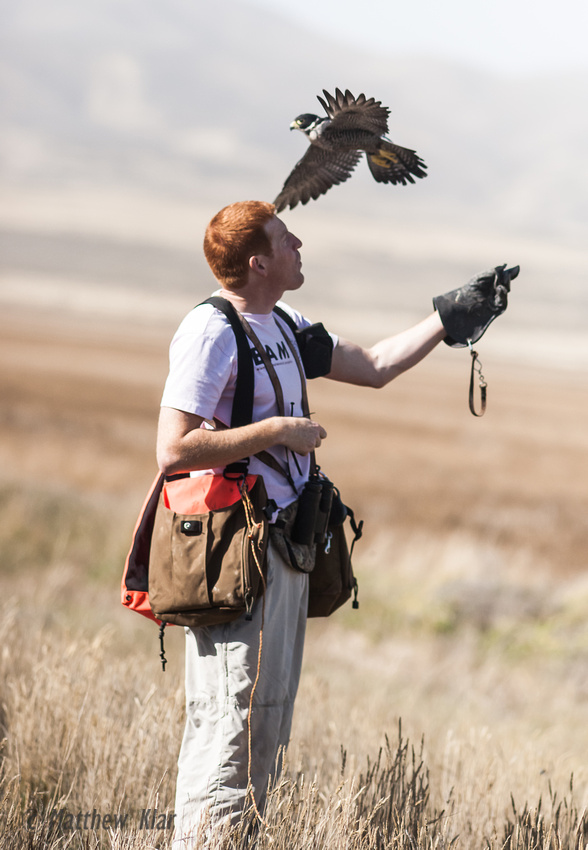 Approaching the lure at 500 feet: 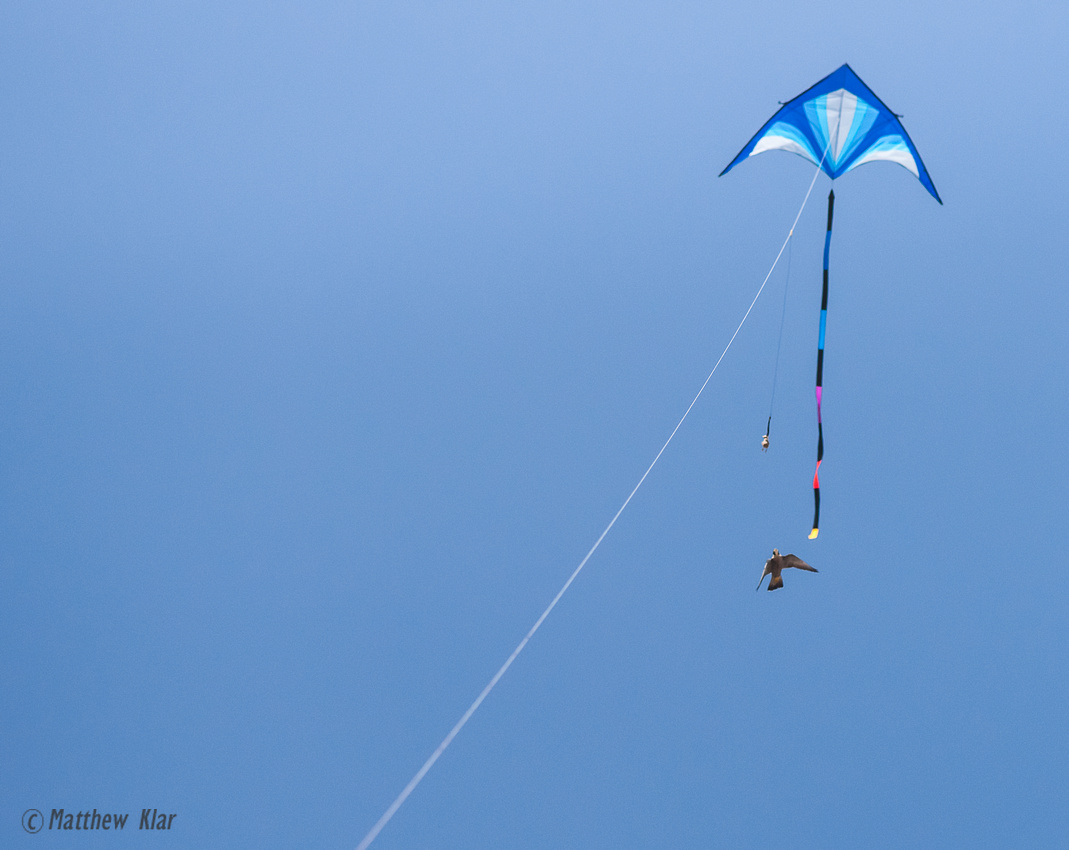 Grabbing the lure (note the slack between the yellow friction clip and the lure itself): 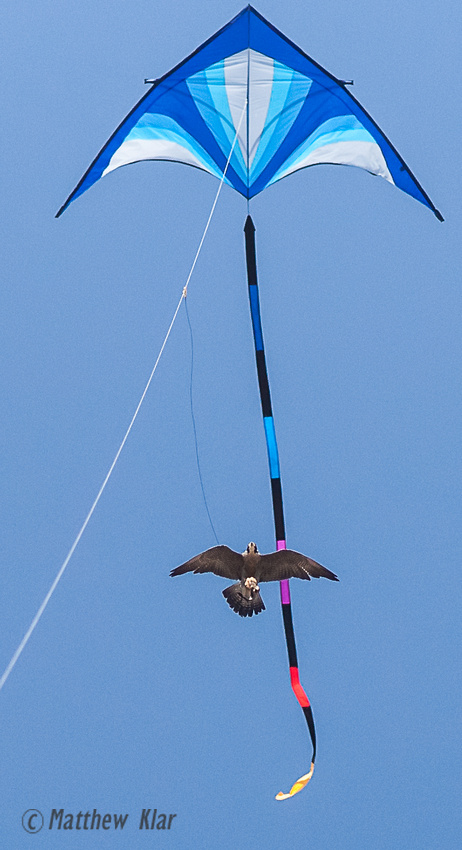 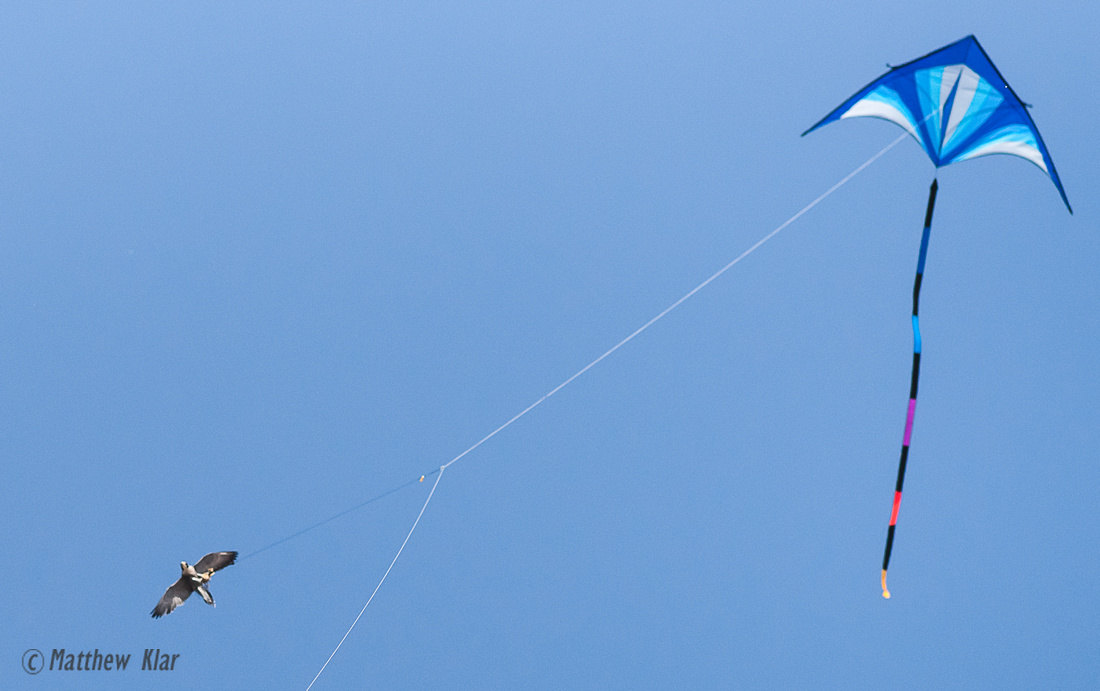 Now he'll ride the lure leash down the main on the D-ring just like running a Zip line: 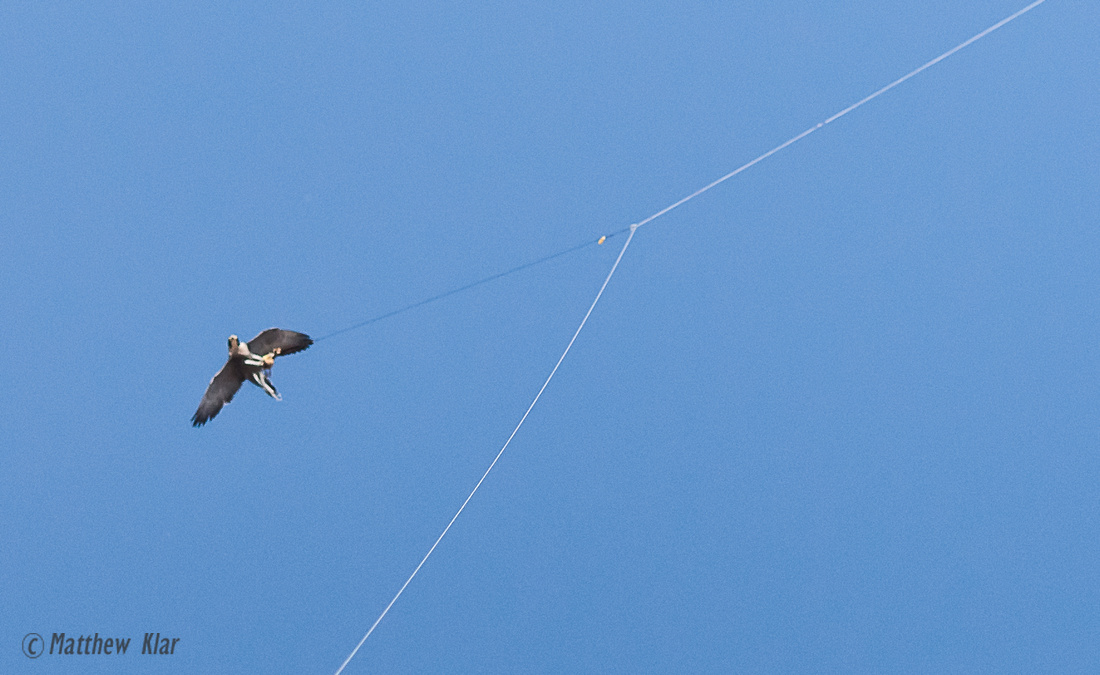 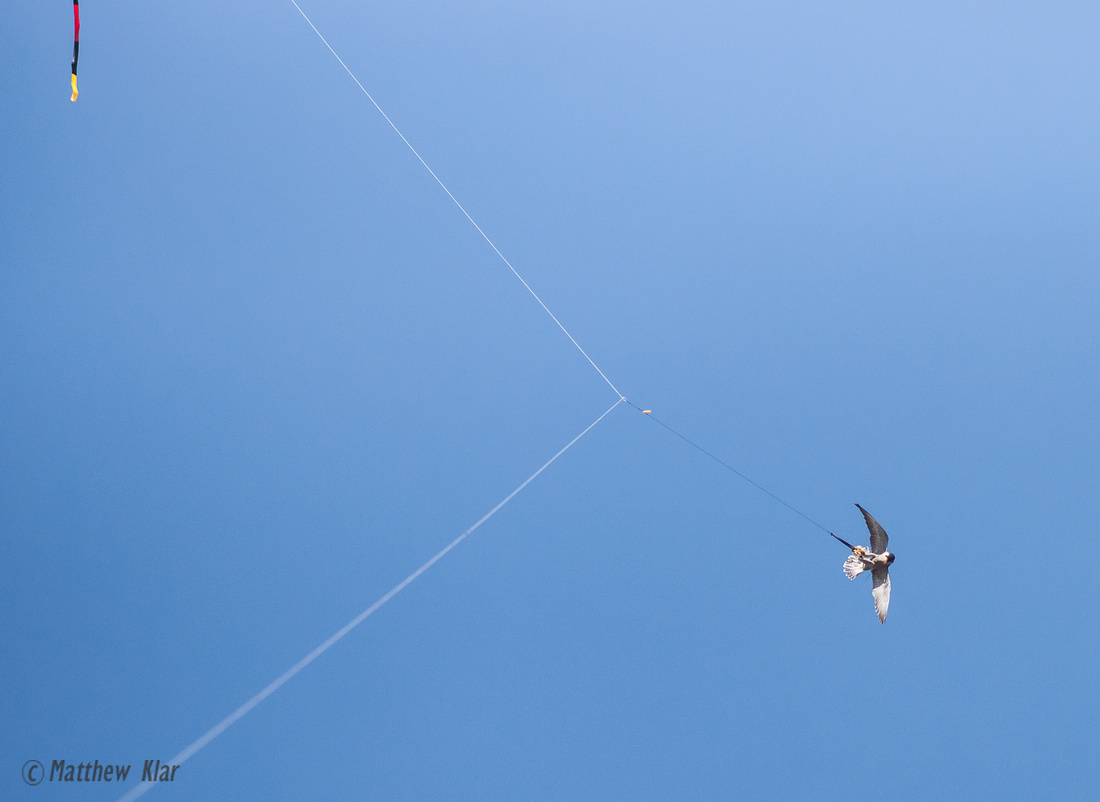 Successfully on the ground with his prize: 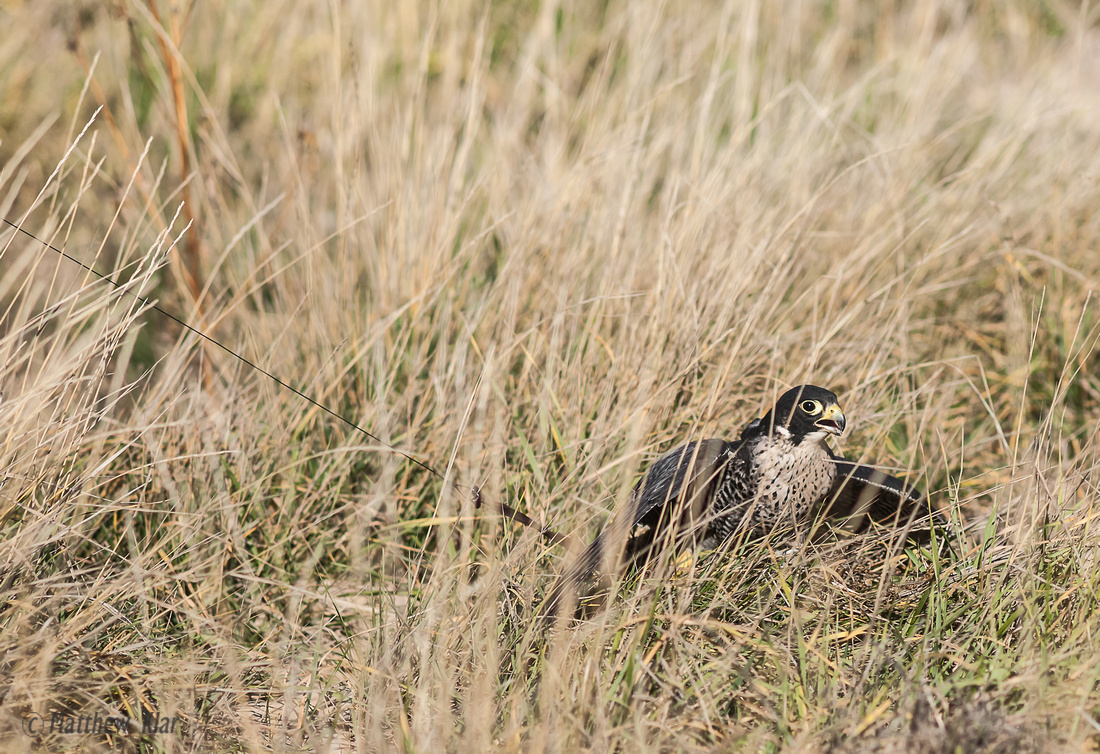 Once the bird is doing this reliably, a pigeon can be released underneath the kite - the falcon will almost always dive for it.

Once he's doing that well, the kite can be eliminated with the pigeon only released when he reaches the height he's been trained to attain.

Once he's doing that well, we're essentially hunting now, no?

Video of the above photo essay:

Video from the perspective of a balloon at 1000 feet:

Video of Fighter Pilot flying on a pigeon sans kite:

Whew!  That was another long one!  If you've been following on Facebook, you know that Tonks & Dora have been hunting for about two weeks already.  Now that we've gotten some of the background info down, next week we'll hit the ground running!