Falconry Friday! How to Train Your Dragon (Part 1)

Author's note:  This ended up about a third longer than intended, but when I first started out I used traditional training techniques that I now believe were less than optimal  mistaken , and this was the obvious place to expand on that.  I threw in some extra pictures in case my rambling gets too tedious!  -Thanks.

As we learned last week, falconry is a hunting sport and the type of raptor you decide to fly is determined almost entirely by the type of game you have access to.  So, we have our permit(s) and our sponsor and we've settled on a species to fly. How do we go about actually getting a raptor?  There are really only two options here:  captive-bred or wild-caught. 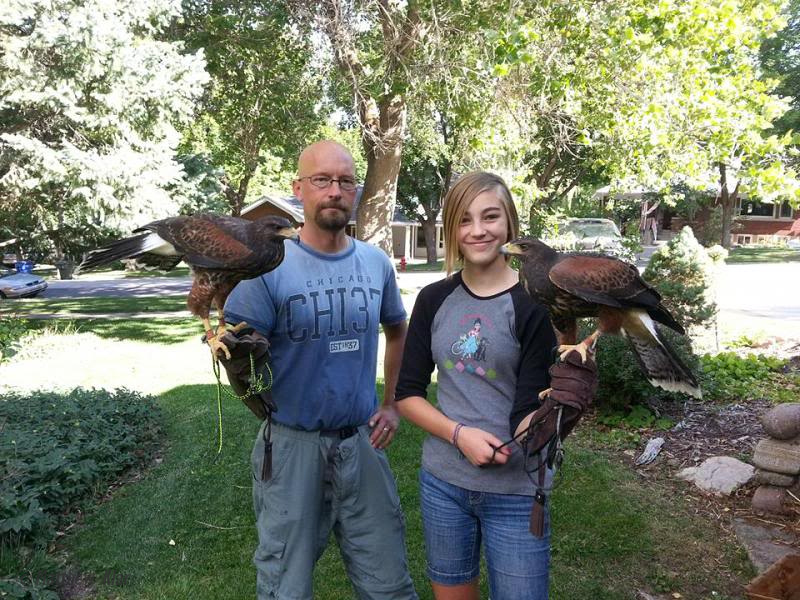 The captive breeding of raptors was originally developed to help the Peregrine populations recover from the pesticide DDT and has has been perfected for 50 years now. (A separate Propagation permit  is required to do this). Harris' Hawks and Goshawks are the most commonly available captive-bred hawks, while nearly all of the common falcons, except Prairie falcons and kestrels, are readily available from reputable breeders.  All captive-bred raptors must have a seamless gold USFWS band applied within two weeks of hatching to be eligible for sale.

-high probability of being free of pre-existing injury or disease

-will already be habituated to the presence of humans

-no pressure on wild populations

-no hunting skills whatsoever at the time of acquisition

-non-releasable (must be sold or given to another falconer) 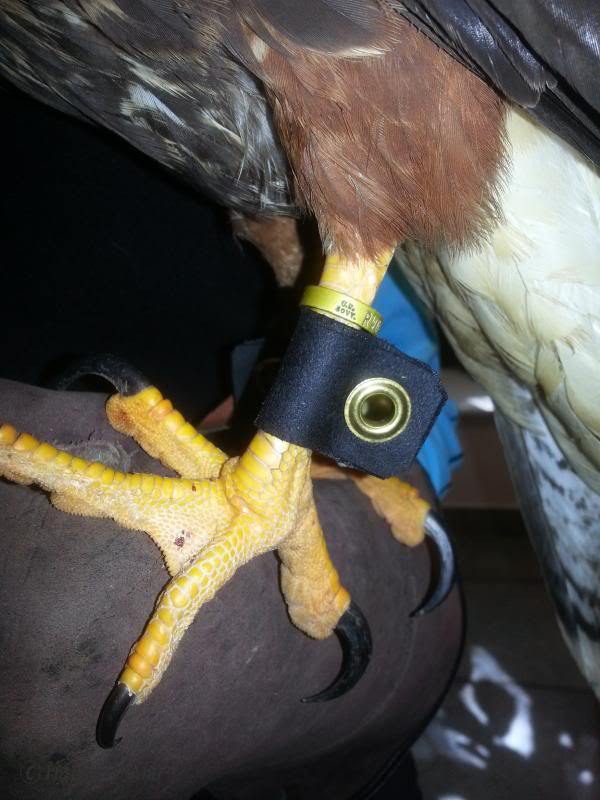 All but two states allow raptor capture permits to some degree, with many states allowing up to two capture permits per year.  The USFWS 2009 Environmental Assessment documents that falconers have no biological impact on wild raptor populations, capturing only 998 of 3,100,000 juvenile raptors each year (0.03%).   It should be noted here that apprentices are not allowed to take a pre-fledgling (eyas) from the nest -  they must catch a passage raptor, defined as a juvenile in it's first year from the time it leaves the nest until it's first molt.

-releasable (under appropriate circumstances) if necessary

-many species are only available as wild-caught birds

-higher incidence of hidden injury, disease, or malnutrition at time of trapping

-not acclimated to humans

Raptor Capture table from USFWS Environmental Impact Assessment showing just how few raptors are removed from the wild for falconry: 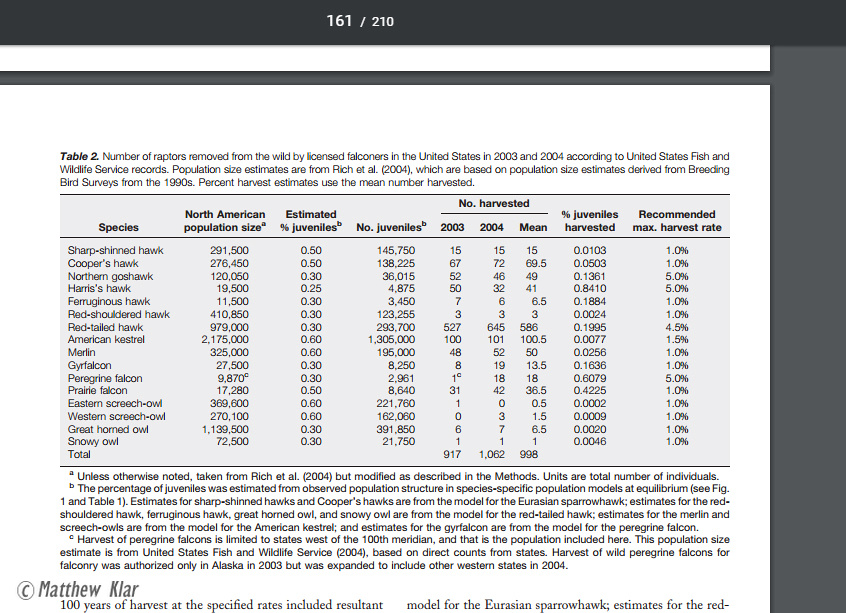 There are numerous accepted methods of safely trapping a raptor from the wild, but most falconers are reticent to discuss these methods in public forums.  For those prospective falconers who are interested, my friend Ben's book Trapping Essentials is the gold standard of current publications. For now, let's assume we've caught our dragon and move on to how we're going to go about training her. 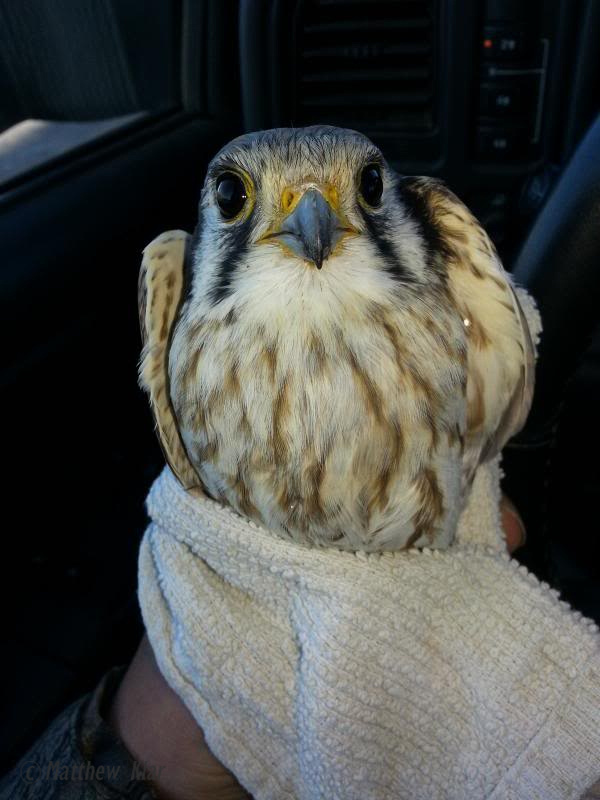 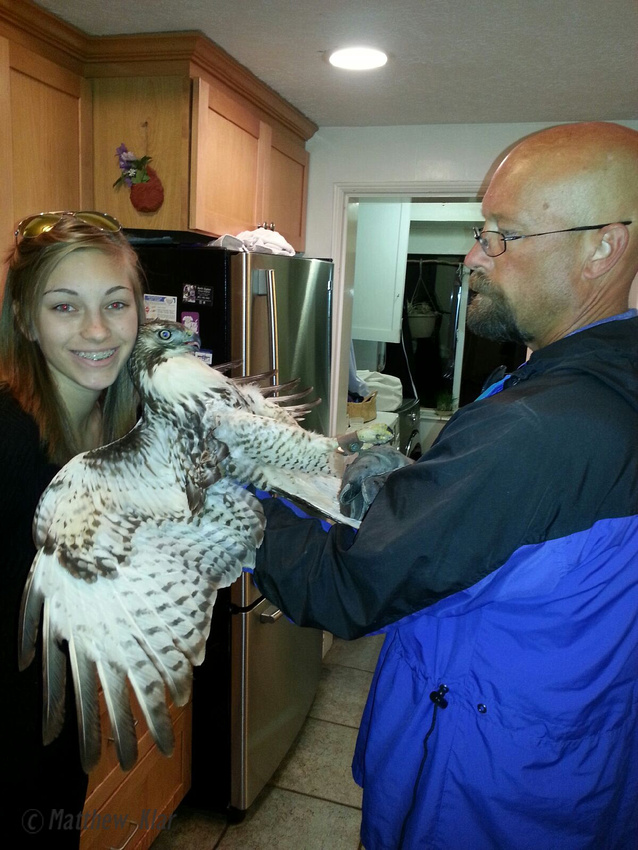 This last picture is of Lily, our Red Tailed Hawk, 30 minutes after we  got her home last fall.  She's in classic "I'm about to be eaten by a large predator" posture, which is certainly understandable given the events of the last hour or two.  So how are we going to going to get from here to willing hunting partner?  Well, I'm going to break from tradition right off the bat and tell you the very first thing we're going to do: nothing. We're going to put her on an indoor perch, turn off the lights, and not come back until tomorrow.

The process of acclimating a wild raptor to a human is called manning and traditionally this meant getting her used to sitting on the glove while the falconer walks around, exposing her to various stimuli repeatedly until she learns to stay put.  Sure, we need to be able to handle her - install jesses, clean feet, trim beaks, etc. but standing on the glove is not our end goal and the lessons learned in traditional manning are counterproductive to the end goal of an enthusiastic hunting partner.

See, behavioral studies (which I wish I knew about when I started and which I think should be required reading for anyone working with raptors) show raptors are just as susceptible to PTSD and learned helplessness as we are. From the bird's perspective, nothing reinforces helplessness faster than the trauma of repeatedly finding yourself hanging upside down from the glove after unsuccessfully bating away from fearful stimuli you know you can't escape.

Lily calm and collected the next morning: 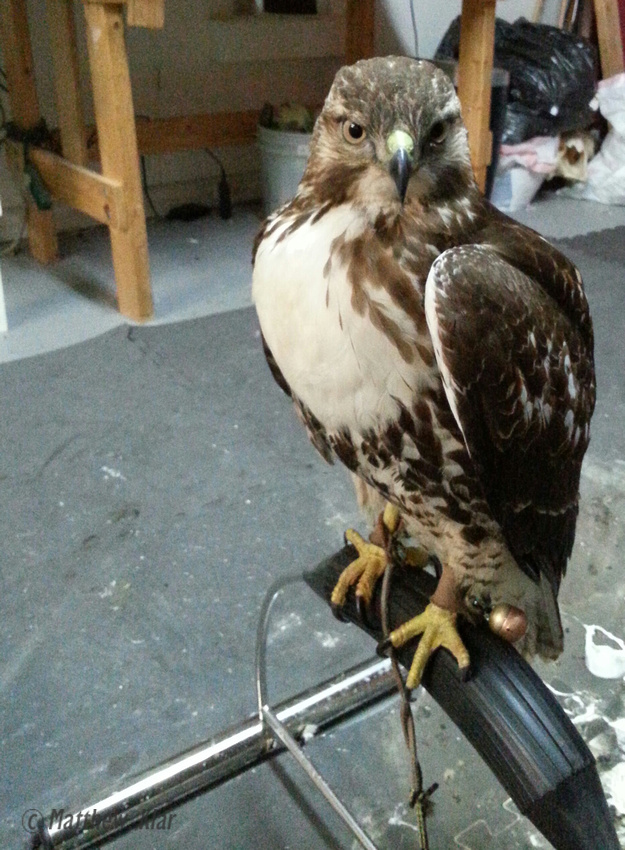 We do need her to come to the glove though, so how?  We're going to give her the freedom to make as many decisions as possible, as soon as possible, using food as a positive reinforcement. A raptor will rarely turn down free food, but she won't really work for it unless she's at or close to her ideal hunting weight. Indeed, raptors in the wild spend 93-94% of their time perched and less than 1% of their time actively flying after game. (Yarak is the falconry term that refers to the combination of ideal hunting weight and mental focus on the hunt). Finding that ideal weight is the key to training.

First, we'll approach VERY slowly and offer a little tidbit of meat for her to pick off the glove - at head level and while she's on her perch.  "Wait, what? You haz food...for me?"          Every raptor I've trained has gotten at least this far by the morning after trapping.

Next, maybe after a couple days of this, we'll offer food at foot level -- and this is a pretty big deal for her in terms of trust because she'll have to expose the back of her neck to you, which is a big no-no they teach in Survival 101 class.

As we approach our target hunting weight, we'll move from the perch to a plank - anything will work as long as it's about 6-8 feet in length.  She sits on one end  with us at the other.  A piece of food is placed on the plank just far enough away from her that she'll have to take one little step - but a step in our direction - to get it.  This is the funniest part to watch as she'll comically stretch and stretch and stretch to try to avoid taking that little step.  She will though, and in a day or two will zoom right down the whole length of the plank, grab her food, and zoom right back to her spot every time.

We're about seven to ten days out now and it's time for her to step onto the glove for her food - just a step initially, then a one-foot hop, then two or three feet.  A day or two more and she'll fly 20 feet across the room without hesitating.  Bam! She's coming to the glove - and riding around on it - of her own free will because that's where the food happens, first directly and later because that's how we get from the car to the hunting field. 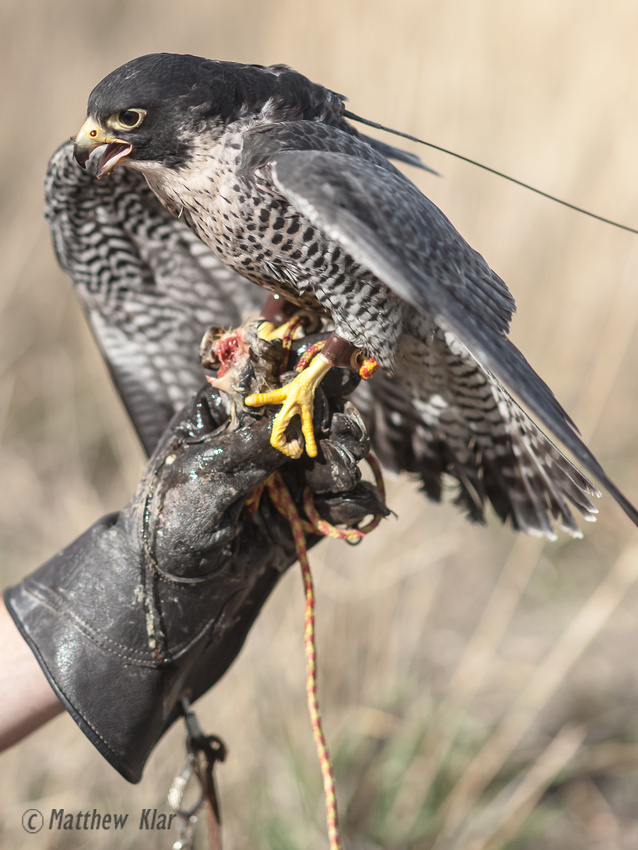 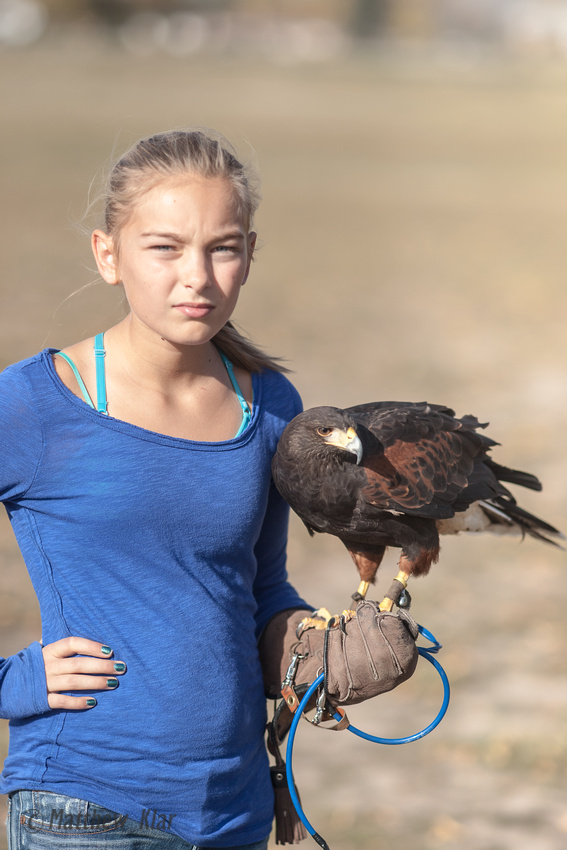 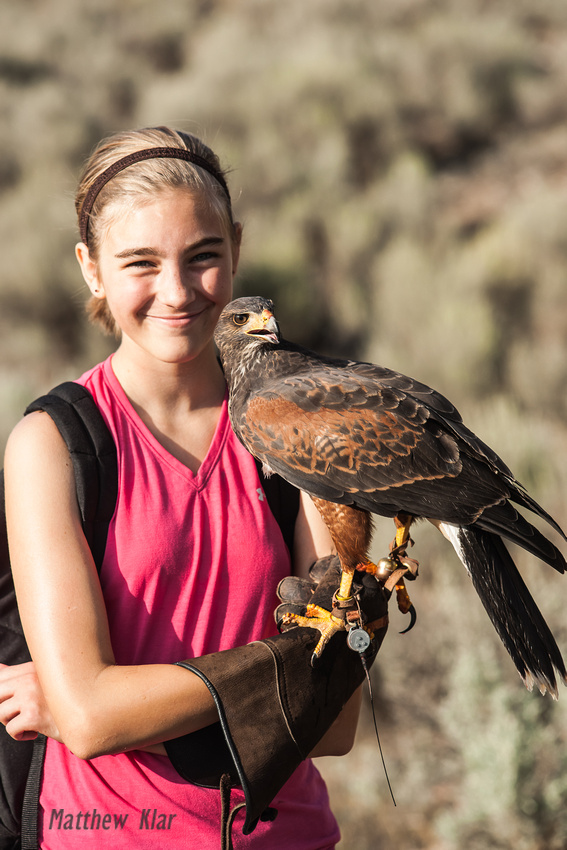 Now it's time to move this whole production outside, where there are more distractions.  We'll use a lightweight long line called a creance and start at the beginning, first with a one-foot hop, then two, etc. She should be flying 50-100 feet to us in less than a week.  Once she's done this a couple times that's it.  We're done and it's time to be in the field.  I'm leaving a couple tricks out here, but overall no more good can come from continuing to do this routine at home.  In fact, to continue to do so tips into a common problem with worry warts everywhere: over-manning. You're making her do the work but without the emotional reward of  chasing and catching prey.  This makes for an angry, resentful, fist-bound hawk.  As the adage goes:  The solution to nearly every raptor behavioral problem is more hunting and less training! 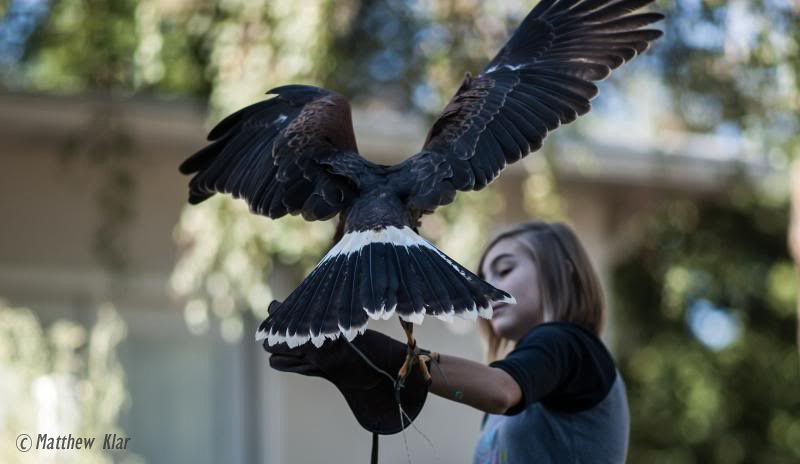 Lily flying on a creance at the park:

Lily flying on a creance initially then free:

Lastly, we'll do a few untethered free flights in the area we actually want to hunt, which naturally segues into the actual hunting part as hunting is just a longer walk with fewer tidbits offered.  As you can see below, even when we pull the glove down and she passes us, she's not going anywhere - she's following along and her focus is in and around us looking for food.

Once we're hunting I really only hold them on the glove to go to and from the car.  For the entire hunt itself, they're free to either ride atop the T-perches or follow along from tree to tree. Again, give them the freedom to make their own decisions as much as possible.  They'll pretty quickly learn that game jumps up in front of us and that's where their attention needs to be focused. 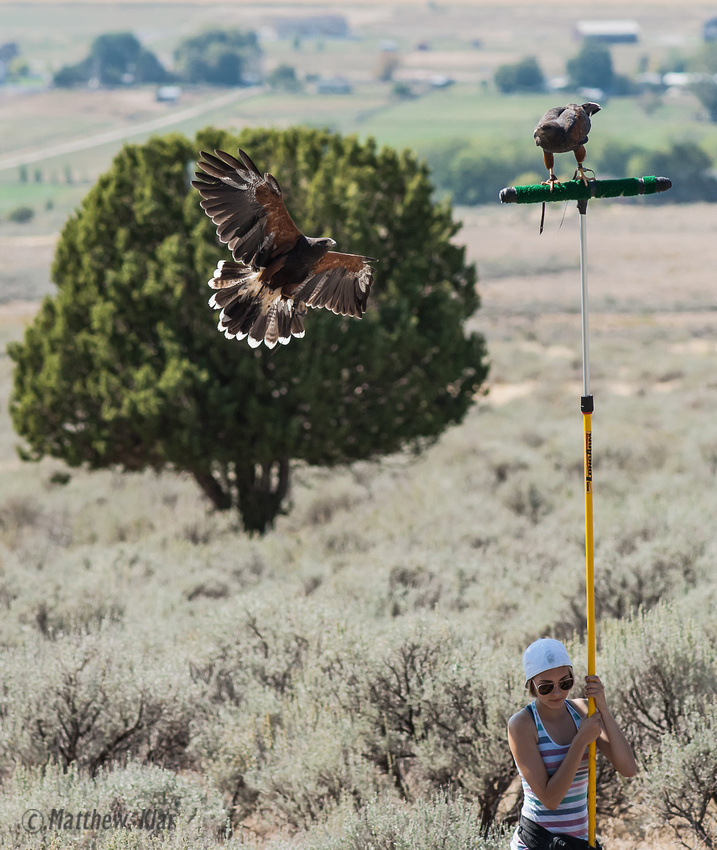 Does this mean things don't always go according to plan? Sure - Dora is famous for disagreeing with me on which way to walk next.

Does this mean my birds are a little wilder than they could be? Sure - but raptors are highly intelligent and they don't like being made to do busywork anymore than I do.

Does this mean you might lose her? Sure - but staying is always her choice anyway and in the age of GPS & telemetry, it's worth the risk to fly early and often. Besides, she's a lot less likely to want to leave if she's having fun and feels like she has a say in the matter. 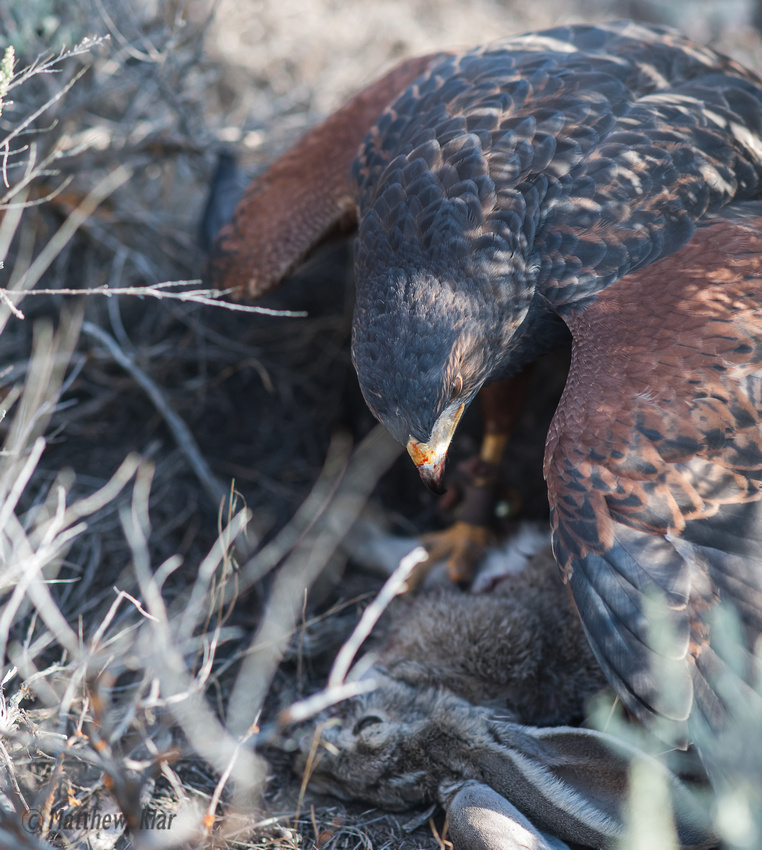 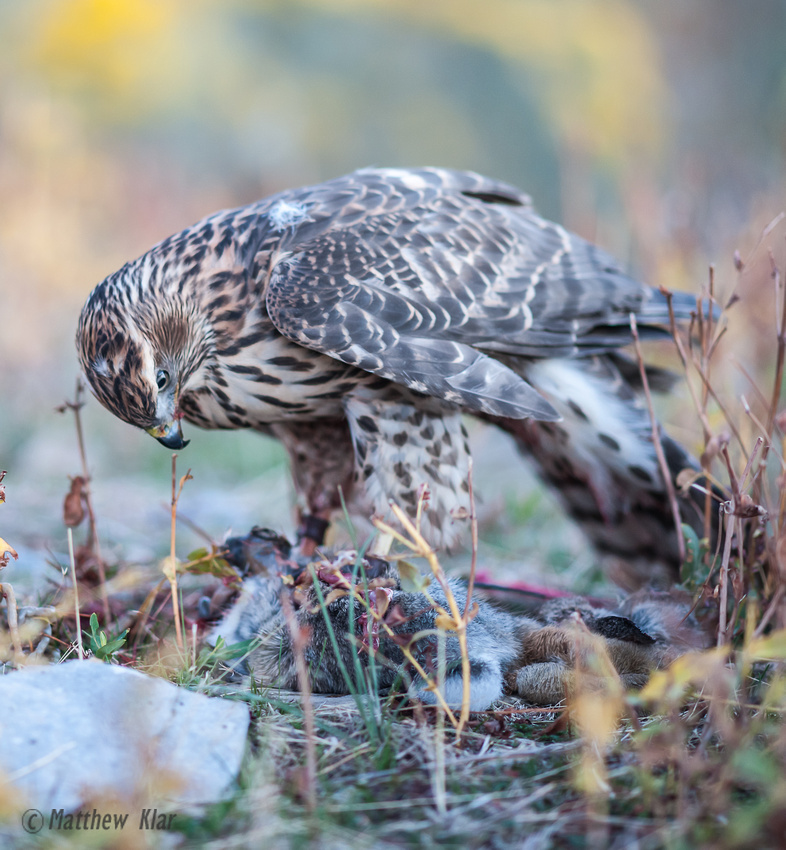 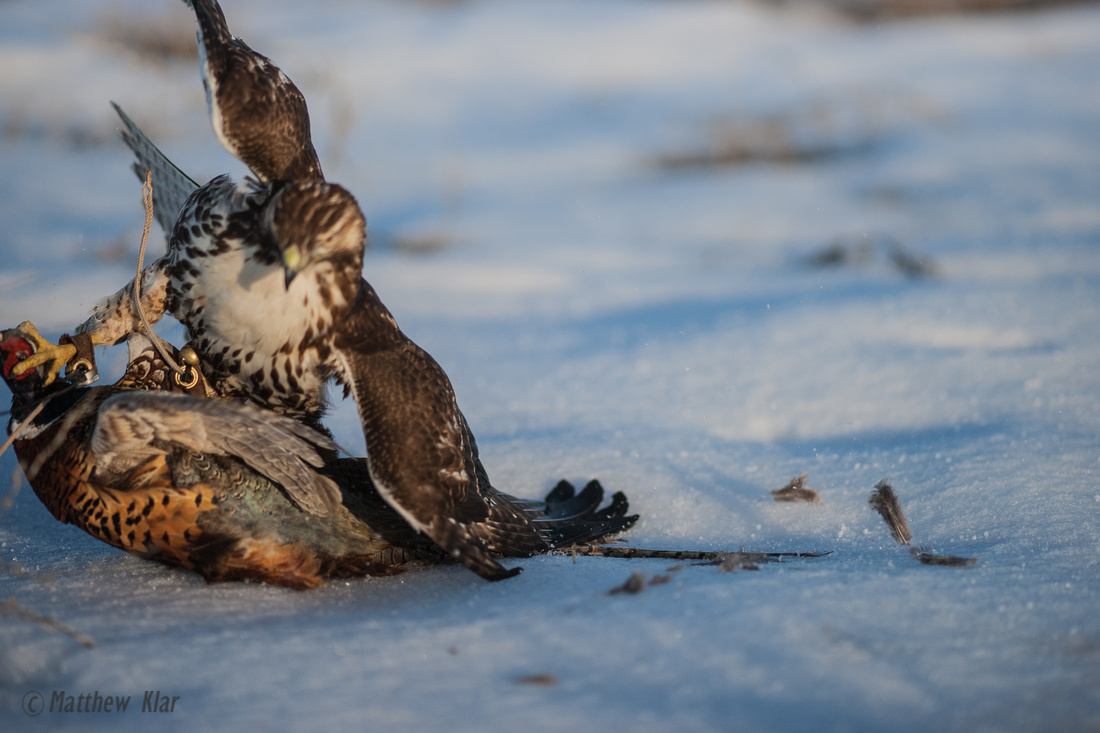 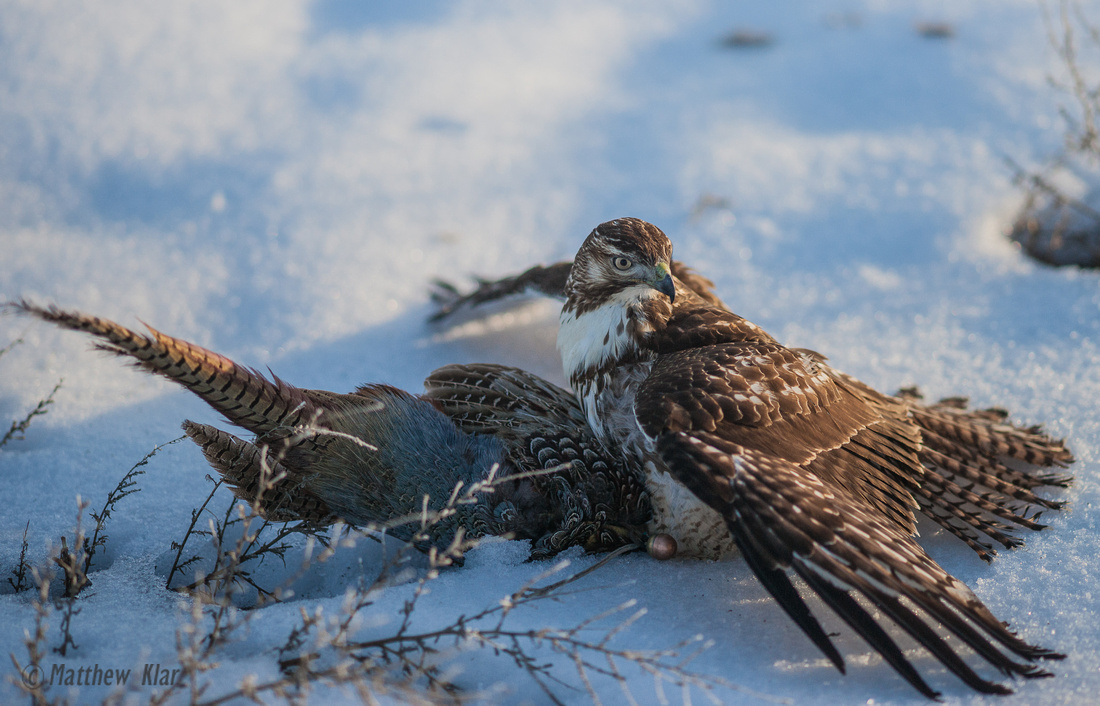 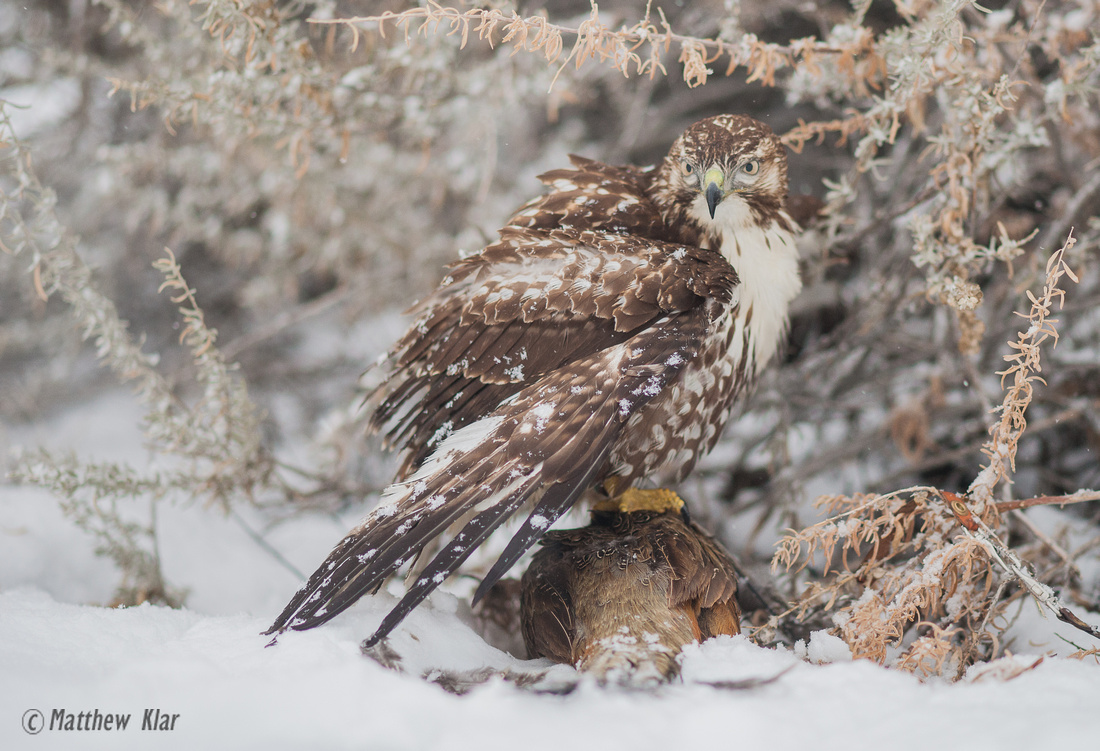 In part two we'll talk about Harris' Hawks and falcons, as they're a bit different in ways that merit some discussion.

MikeNZ(non-registered)
Awesome, I really appreciate the effort that you are putting in to share your sport and your raptors.