Hello again peeps!  As many of you know, I volunteer as a moderator for a number of the Cornell Lab of Ornithology's Live streaming raptor nest cams.

The raptor nesting season typically runs from mid-March to early July each year and my time commitments there will make continuing this weekly blog rather challenging.  As such, I think this will be the last regular Falconry Friday installment until we start flying again in August. I'll continue to periodically post updates on the progress of Cedric the GHO (he came to the glove for food for the first time yesterday!) as well as any other interesting topics that crop up (pun intended). 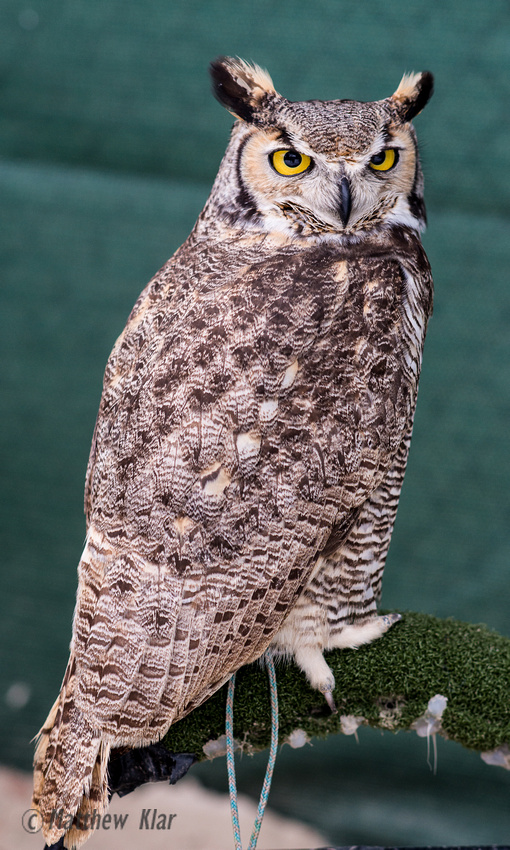 In many ways, this post does bring us full circle - we started in August 2016 with a newly captured juvenile hawk  and followed her through her first year hunting as a falconry bird.  This post will serve as an outline for how that hawk made it from an amorous wink to egg to fledgling to the present.

Given that Cornell's red tailed hawks Big Red and Ezra are the stars of the show, we'll use red tails living in the northern latitudes for the following timeline .

For those interested in the historical timetable data for their five previous on-camera nesting seasons, this handy table was produced by  Cornell volunteer Elly K.

Also by Elly K. , here is a photo essay on identifying Big Red (the female) and Ezra (the male).

Most hawks in the northern U.S. will begin establishing a territory and courting as early as January.  This will be followed by mating multiple times in late February and early March.  Nest site selection is initially the male's responsibility and he will typically have 1-3 locations selected to present to the female, who will make the final decision on the current year's site.

The pair will begin nest building in earnest in early March with most of their on-nest activity occurring in the mornings.  They will begin building (or refurbishing) the nest platform with locally harvested sticks, arranging them into the form of a nest cup.  As egg laying approaches, they will begin supplementing the stick deliveries first with strips of bark that will be worked into the nest cup to form a soft, insulated bowl for the eggs.  Finally (and continuing through incubation) they will further supplement the nest cup with fresh evergreens, which serve two functions:  (1) to advertise the nest's occupancy and (2) evergreens have anti-fungal, anti-bacterial, and anti-parasitic properties thought to help protect the youngsters-to-be.

Most hawks in the northern U.S. will lay from one to three eggs, with kestrels and ferruginous hawks being the clear outliers laying up to six eggs.

The first egg is typically laid in mid-March with subsequent eggs laid approximately 4 days apart.  This interim period is often referred to as soft incubation in that the parents are keeping the eggs warm enough to preserve viability but not warm enough to begin internal development of the embryo.

Hard incubation begins with the last egg laid and will keep the nest cup at 98*F and 43% humidity for the duration of the 28-40 day incubation period.  The nest cup at this stage is just large enough the adult hawk's body to form a tight cap on top.  Most of the incubation will be performed by the female.  The male will bring food to the nest, which the female will typically eat off-site - absences that give the male his only real "nest time".

During incubation, the parents will rotate the eggs every couple hours -- a vital function given that the membranes surrounding the embryo within the egg (the chorion and allantois) will fuse and kill the embryo were the egg to be left stationary.

The following is a synopsis of the embryo's development within the egg during this  incubation period:

--The embryo's heart starts to beat within 72 hours of the start of hard incubation. Initially the heart has only two chambers, but quickly differentiates into four chambers.

--By day 11, the embryo has doubled in size, the ear opening is visible, and the skin has taken on a texture that delineates the future feather tracts (pterylae). The bones of the skull and the feet are also becoming visible.

--By day 12, tail feathers are visible and by day 14 feathers cover most of the embryo's body.

--By day 15-16, the beak has hardened and the attached egg tooth has formed, the leg scales are present, and ratio between body and limb size is balancing out.

--By day 18 the albumin supply has been exhausted and the embryo's sole nutrition source is now the yolk sac.

--By day 10-20 the eyelids are fully formed and the embryo turns it's head towards the large end of the egg, beak under right wing, with feet drawn up.

--During this time, the embryo has drawn some calcium from the shell as well as lost a fair amount of moisture through diffusion -- the egg actually weighs less now that at the start of incubation!  An air space has developed outside of the chorioallantoic membrane but within the shell due to this loss of fluid.

--Soon the yolk sac will be drawn into the abdomen and the umbilicus will close. The chorion no longer provides enough oxygen to the embryo and carbon dioxide begins to build up.  This build up of carbon dioxide causes the embryo's neck muscles to twitch, which in turn causes the egg tooth on the beak to puncture the chorionic membrane, allowing the embryo to breathe in the air space within the shell.  Hatching has begun and can take up to 72 hours to complete, although 36 hours is more typical!

-- Carbon dioxide continues to accumulate (up to 10% concentration within the air space compared to 3% in the atmosphere) which causes more vigorous neck muscle twitching.  This twitching hammers the egg tooth on the beak against the now thinner eggshell. As the embryo shifts in position, the egg tooth cuts a circular path around the large end of the egg, forming a cap that will eventually break loose freeing the embryo from the shell. 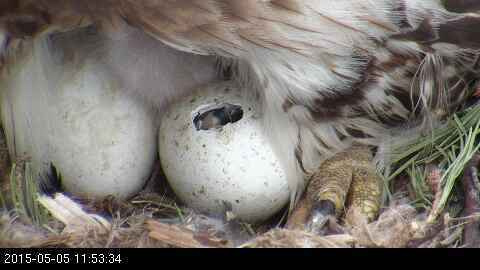 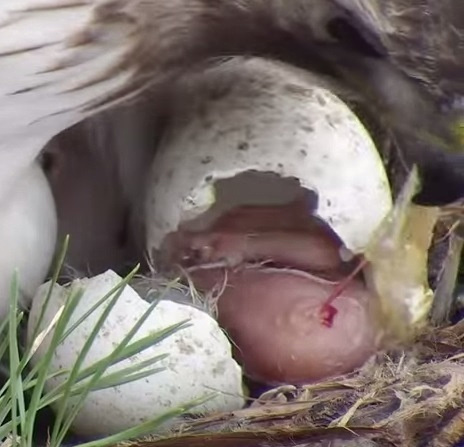 At hatching (typically in mid to late April), the new nestling will be covered in wet down that will quickly dry to a whitish fluff (called the natal down).  All three embryos will typically hatch within a 3-4 day period and at this stage they are at their most vulnerable to temperature fluctuations.  The parents will continue to cover them in the nest cup, maintaining a temperature of 98*F and a relative humidity of 78%. 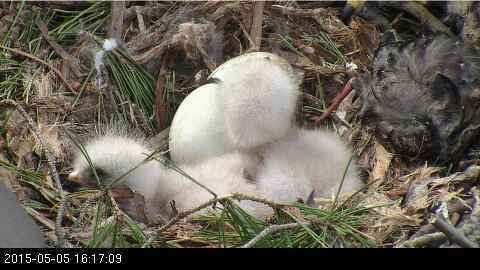 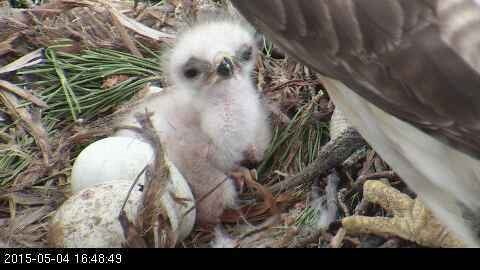 The newly hatched nestlings will typically eat their first morsels of food within 12 hours, but this is not critical as their internalized yolk sac remnant provides energy for up to 48 hours post-hatch.  Early on, the parents will feed the nestlings about every two hours and their first castings will occur by about day 5.

The male parent will ramp up hunting activity to stock the nest with food, providing, on average, just under two pounds of food per day throughout the 45 day period from hatch to fledge.  Here is a summary of one year's prey deliveries to the nest, closely mirroring the published data of 70% mammalian prey, 24% avian prey, and 1-3% other.

Between day 5 and 10, the white natal down has been supplemented with the grayish true down, greatly enhancing the nestling's ability to regulate it's body temperature. 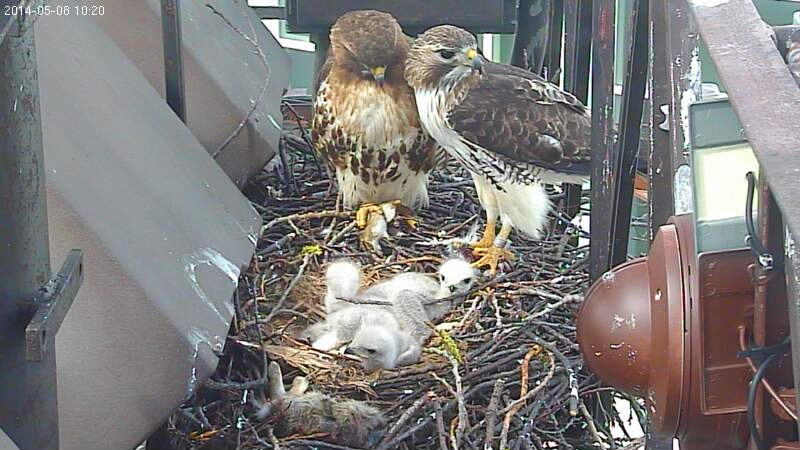 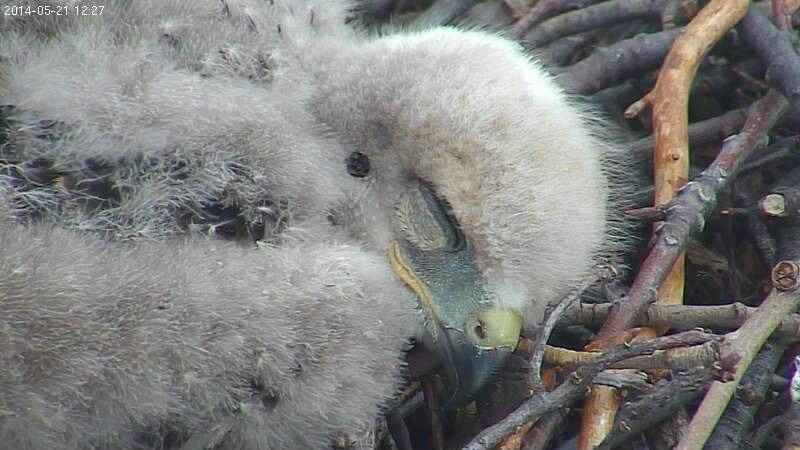 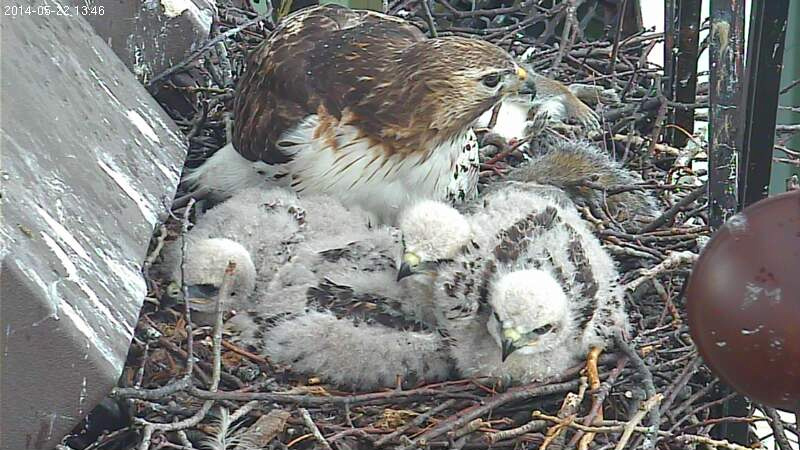 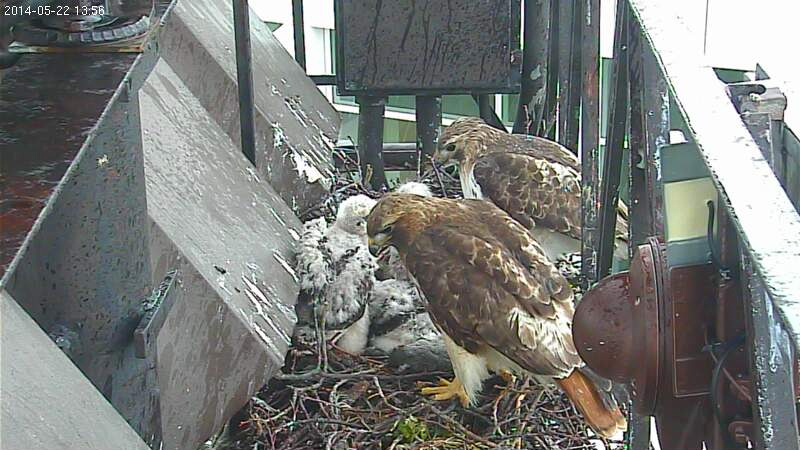 The eyes will be fully functional and the egg tooth will fall off by the end of the second week.

Once the wings are long enough, usually soon after day 14, the primary feathers will begin to emerge.  This is the only time of a raptor's life that all the feathers will grow at once and they can grow quite quickly too - up to a half-inch per day under ideal conditions. 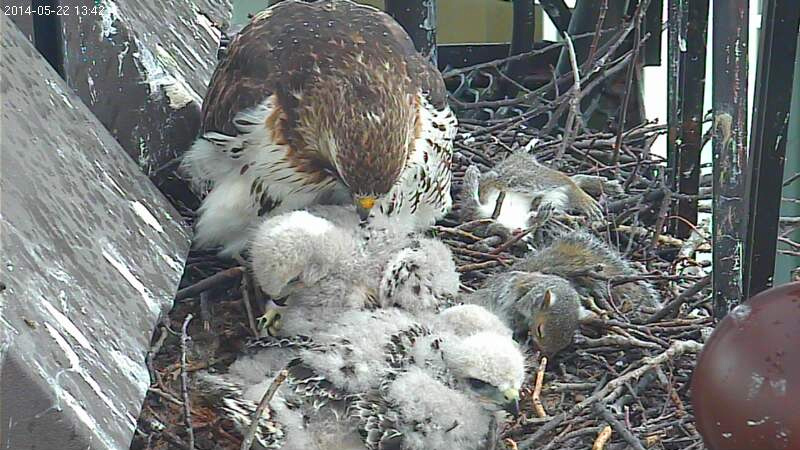 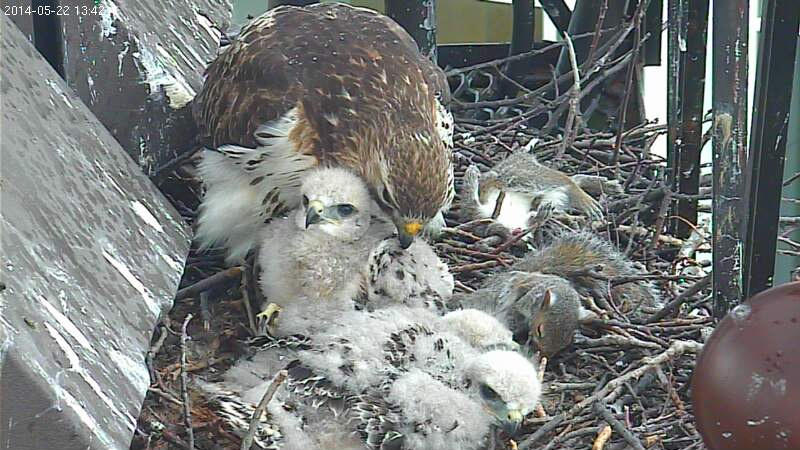 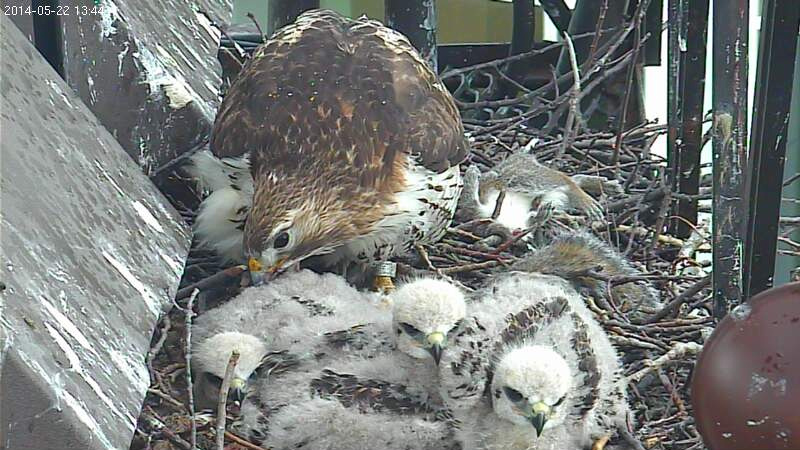 Between days 25-45, the nestlings will become increasingly active on the nest site, flapping their wings to develop flight muscles, learning to stand, walk, and feed themselves with food supplied by the parents. 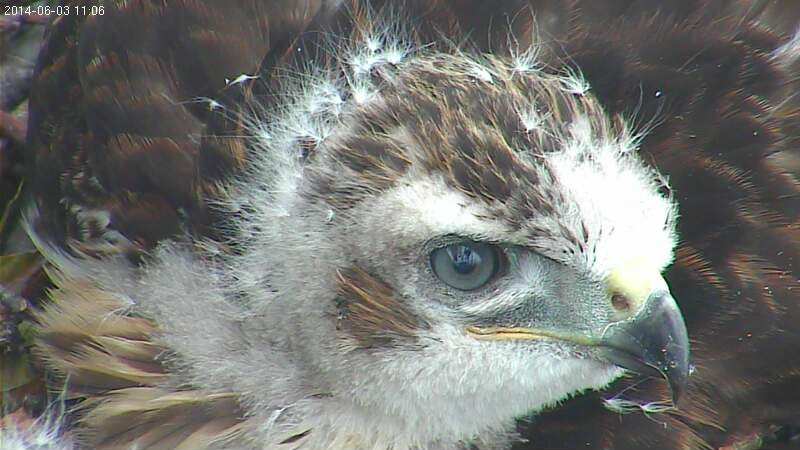 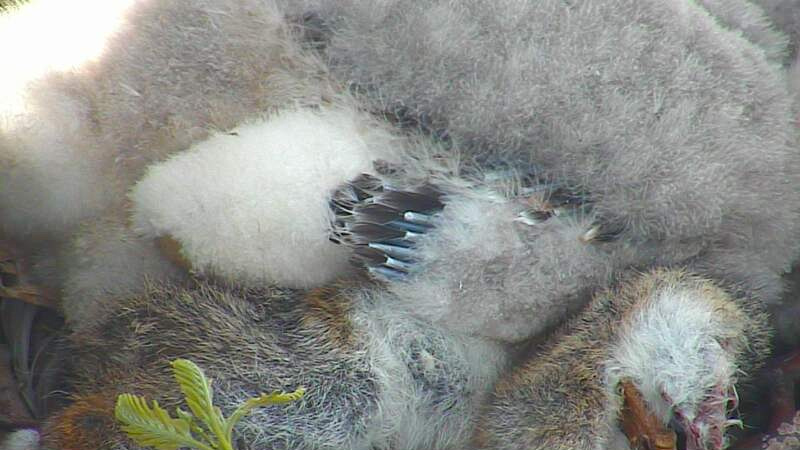 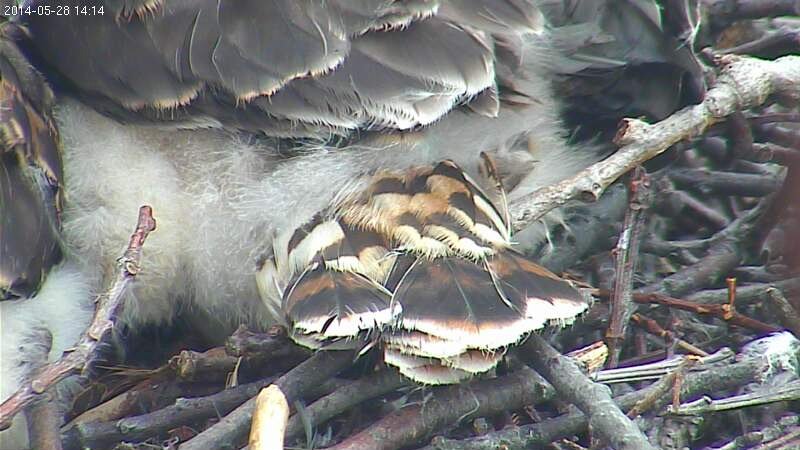 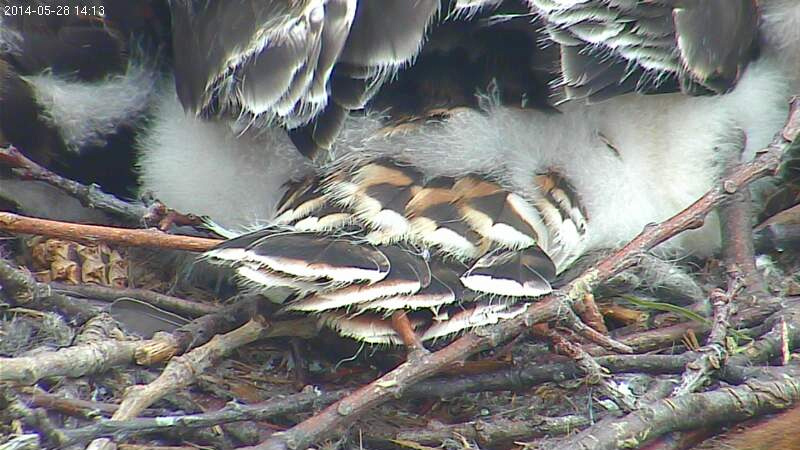 They will typically fledge (leave the nest) around 42-45 days (late June).

Fledging and the first few months away from the nest

Once fledged, they will remain in the immediate vicinity of the nest for up to a month.

Their activity level will double within this time, first by simple perch to perch direct flights as their parents continue to provide food.

The parents will gradually move food drop locations further from the nest site until the fledglings are at the hunting grounds -- at first  observing their parents in action, then actively participating in the hunt themselves.

The parents will continue to provide food and hunting lessons for up to six months post-fledging but most often the juveniles are booted from the parent's territory and on their own by early fall (August or September, bringing us full circle). 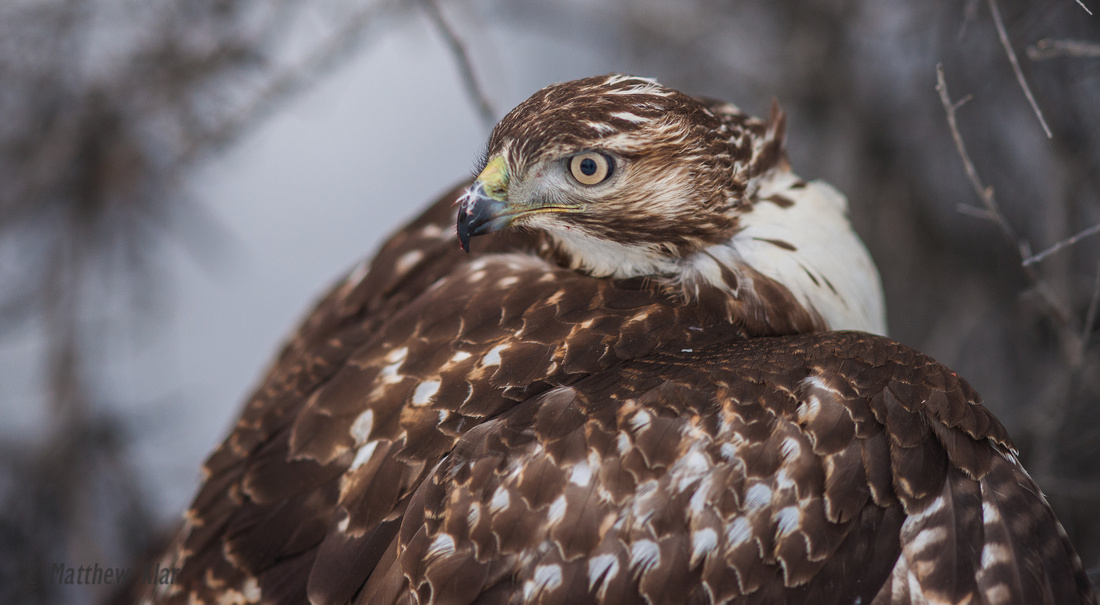 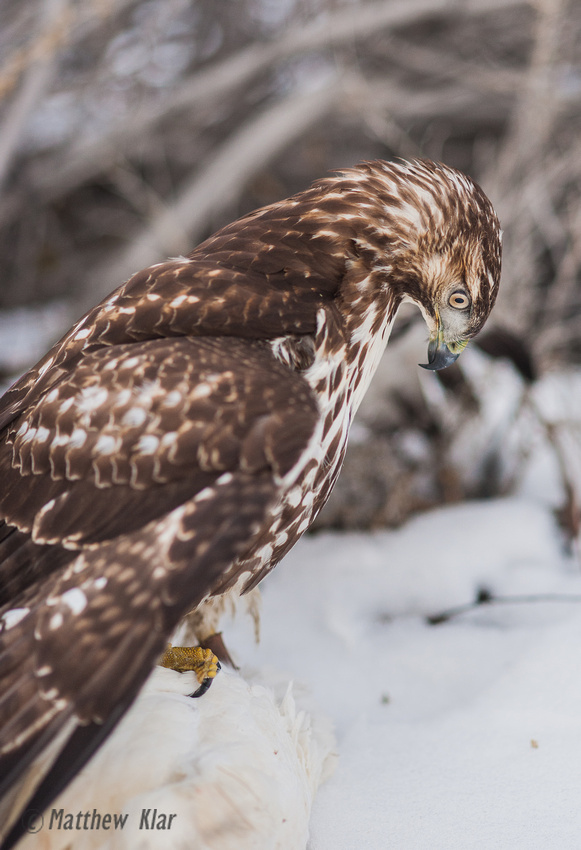 Anndddd....that's a wrap!  I hope you've enjoyed the series and I hope to see everyone again for the 2017 season in August!  In the meantime, please do stop by the Cornell web cam site as that's where we'll be from now until July! 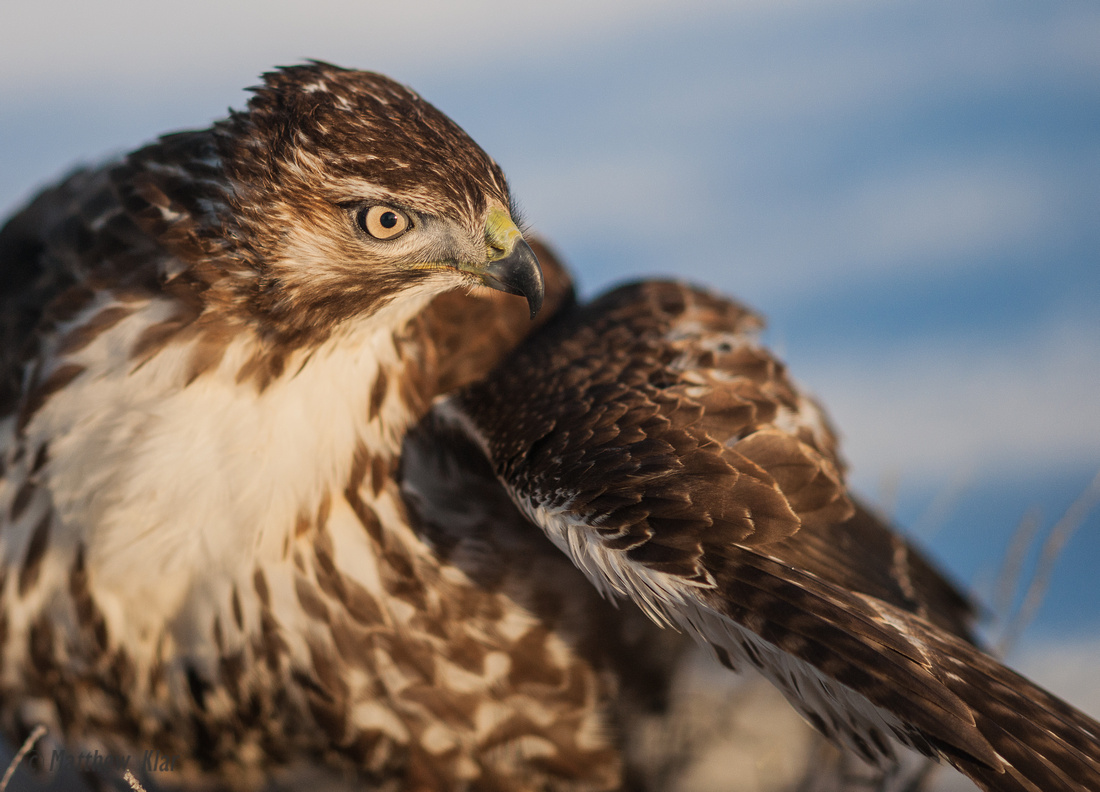