Of course they can, grasshopper!  I mean, if they can float on air they can float in water, right?  However, just because they can swim, doesn't mean they like to -- or that they're going to win any style points in the attempt.  We all know Bald Eagles and Ospreys are excellent swimmers. Harris' Hawks, however, it seems not so much... 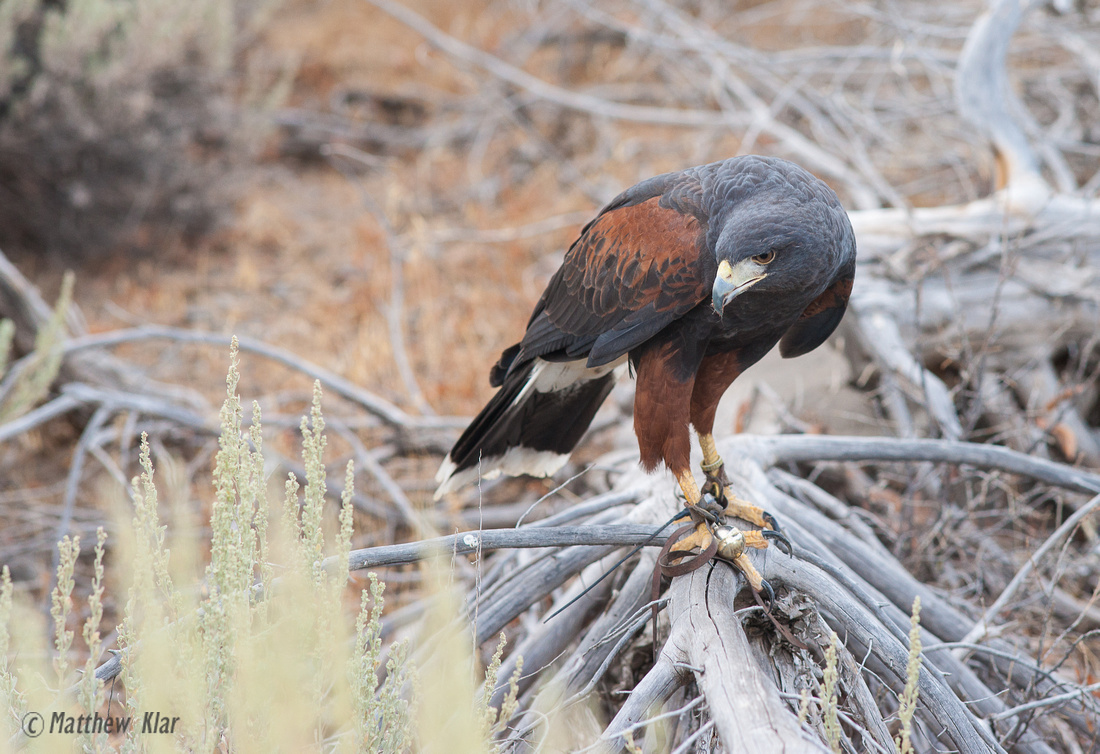 Granted, they're a desert species so everyday interactions with large bodies of water are not the norm. They do like to chase ducks though so these things are going to happen from time to time.

Tonks & Dora had their first deep water swim this week and I was torn between laughing at their "Dad! Get it off of me!" facial expressions and concern about the waterproof rating of the $400 worth of radio transmitters that were now underwater.

It took them about 20 minutes to sort the whole thing out and swim to shore.  Let's be generous and give them a 5 out of 10 for effectiveness and a 3 out of 10 for style: 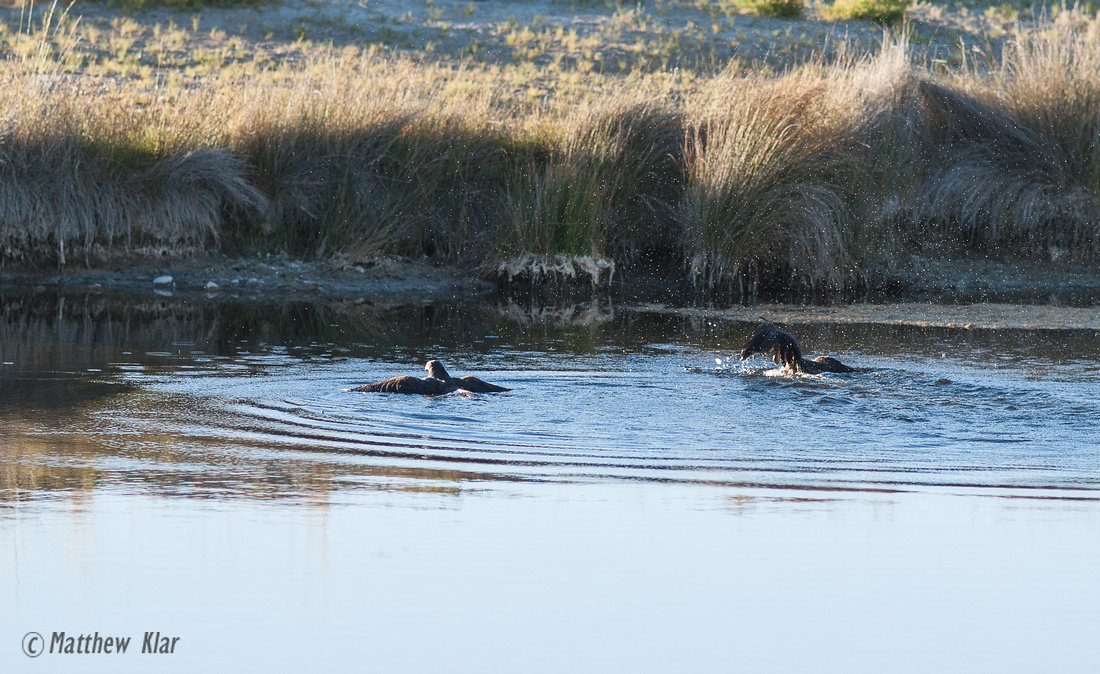 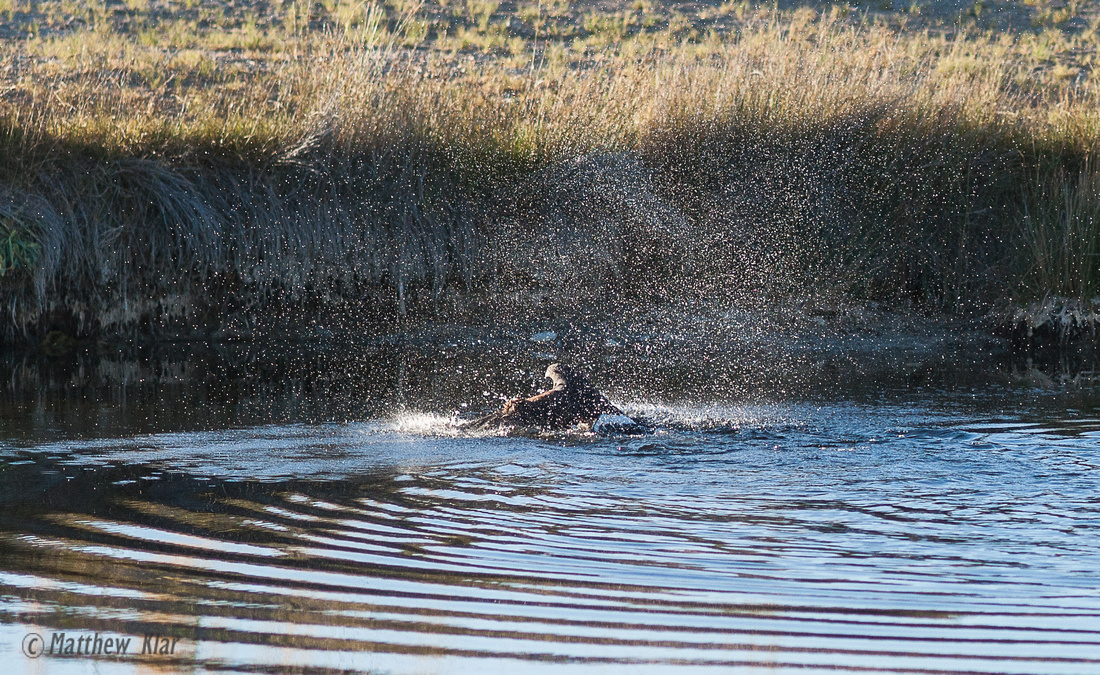 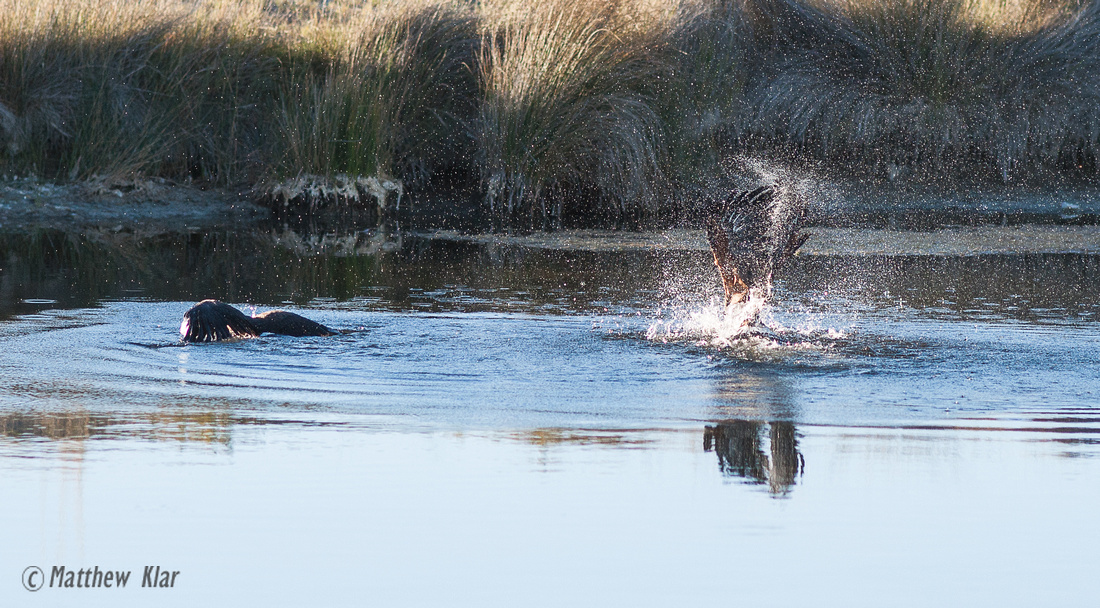 They did figure it out on their own though, and after another 20 minutes of drying out were ready to go again.  Luckily it was quite warm out too, so no worries about hypothermia.  I'm also happy to report that Marshall Scout  transmitters are indeed quite waterproof!

Here's the video  that accompanies the above images:

So, having mentioned radio telemetry several times now in passing, this might be a good time to flesh the concept out a bit. It's not hyperbole to say that telemetry is really the only significant advancement modern humans have contributed to the sport of falconry, but what a lifesaving advancement it has been!  The ability to quickly find a lost bird over both short and long distances has saved many lives, not to mention saving the falconer many gray hairs along the way.

Becoming a proficient radio tracker is as much an art as it is a science - indeed, major manufacturers hold contests with large prizes for both the fastest and most complex transmitter recovery.

The bird wears a small transmitter (5-10 grams) with a six-inch antenna attached to an anklet, tail feather, necklace mount, or backpack mount. This transmitter emits a single beep once per second, with a typical battery life of 20 to 30 days.  Transmitters that operate at higher frequencies, like the 434 MHz Marshall Scout, have a line-of-sight range of 60 miles or more. 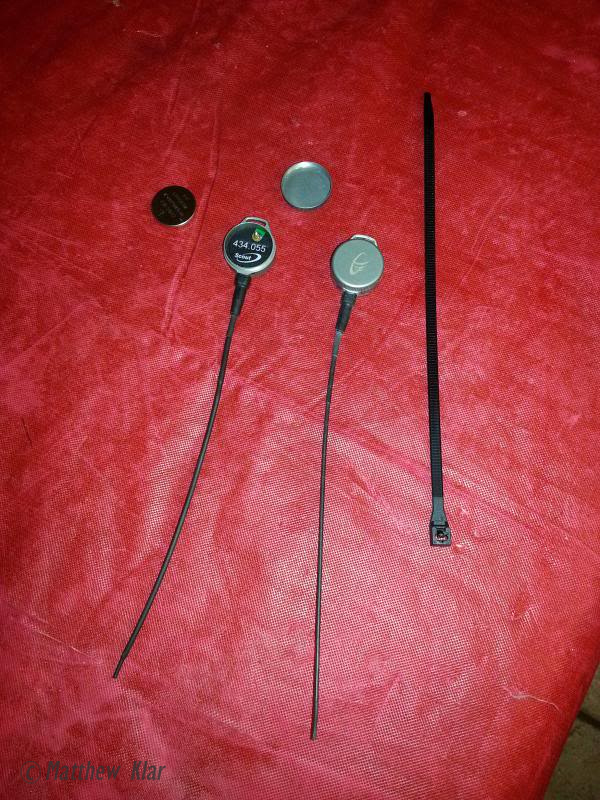 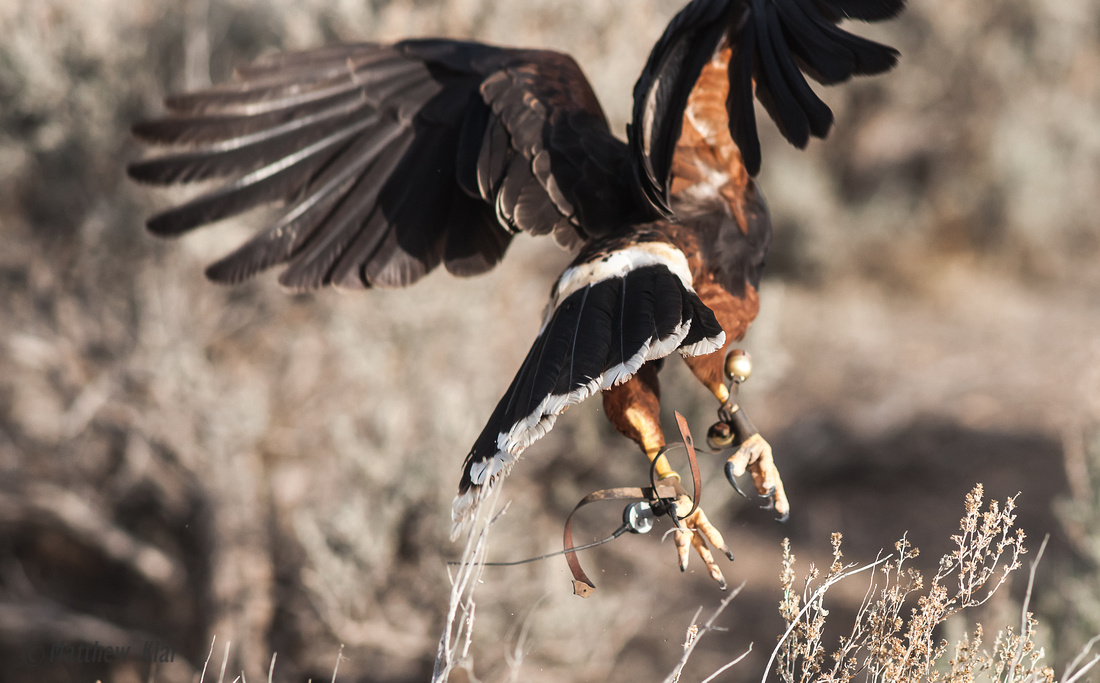 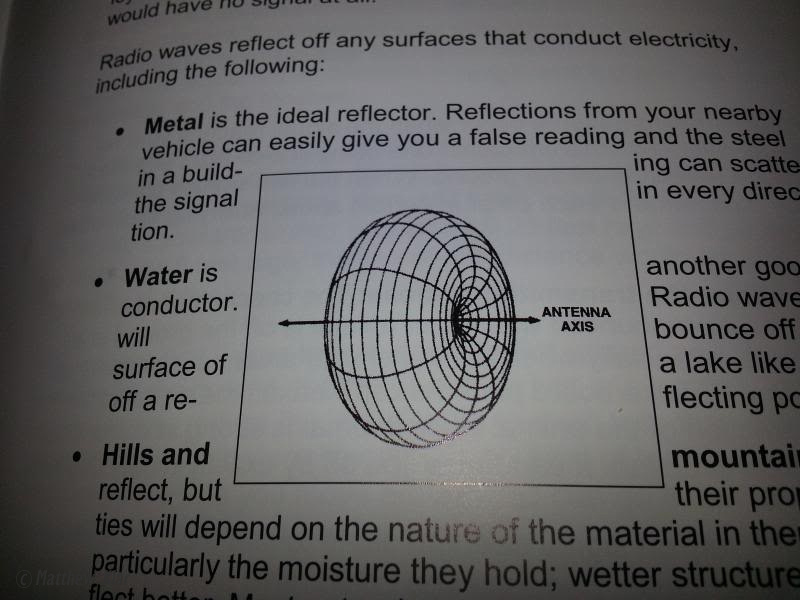 The falconer has a hand-held receiver with a highly directional antenna called a yagi. 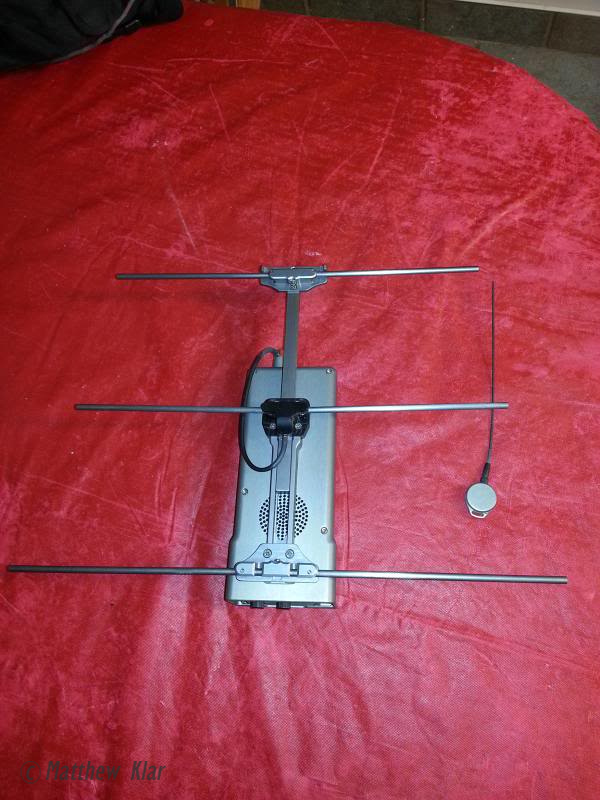 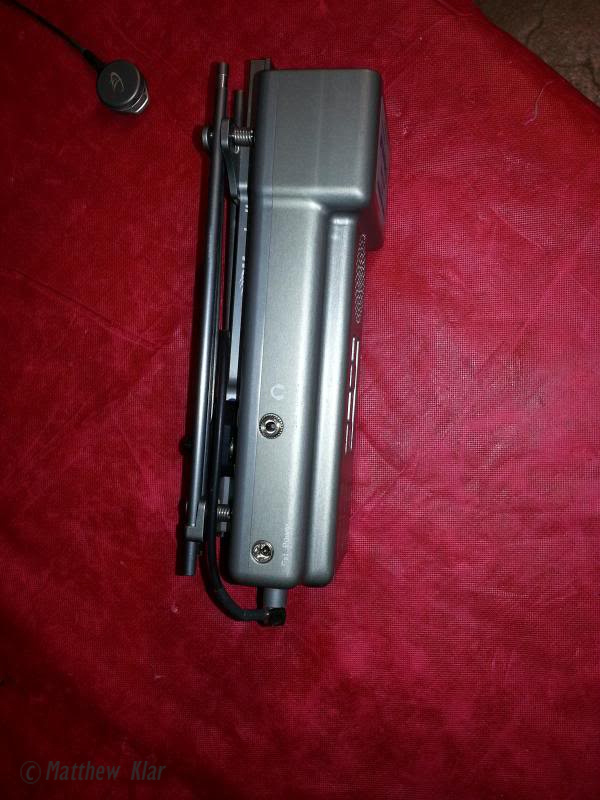 In sweeping the receiver around, the signal will be strongest when the yagi antenna is in the same plane as the transmitter's antenna (vertical/vertical or horizontal/horizontal).

Here is the face of the receiver: 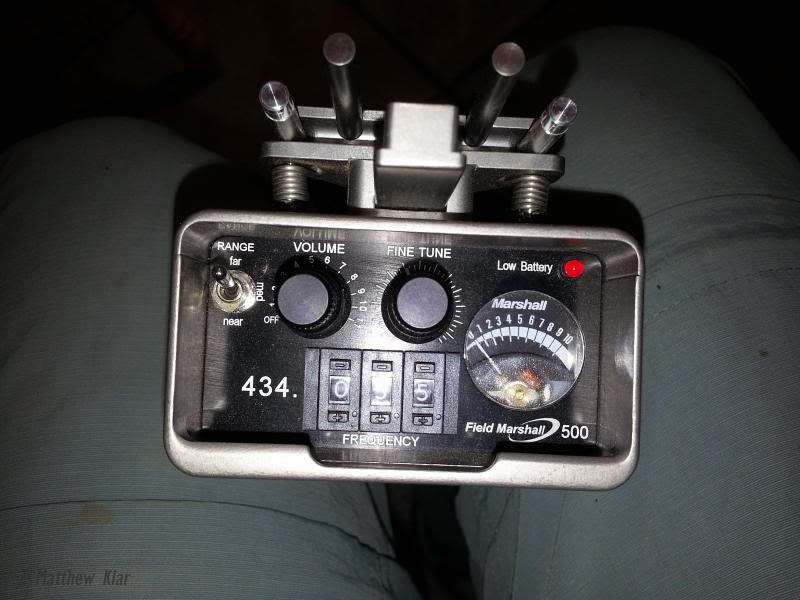 The range switch on the left functions as an attenuator in blocking out signals that are too strong to get a directional reading:

medium = 40 yards to 400 yards away from the transmitter

near = less than 40 yards away from the transmitter

In practice, we want to use the lowest range setting and the lowest volume we can hear reliably and walk (or drive) in the direction the signal is strongest, stepping down the range switch as we get closer.  Using an ear bud headphone is the secret sauce to a quick directional heading!

So why bother with the expense and learning curve with this voodoo?

During the kite training session we reviewed last week, Caleb's other falcon, a Gyr-Peregrine cross, took off in a straight line north, landing in a field of waist-high grass about 10 miles away.  Using telemetry, we were able to recover her without incident in less than 30 minutes. 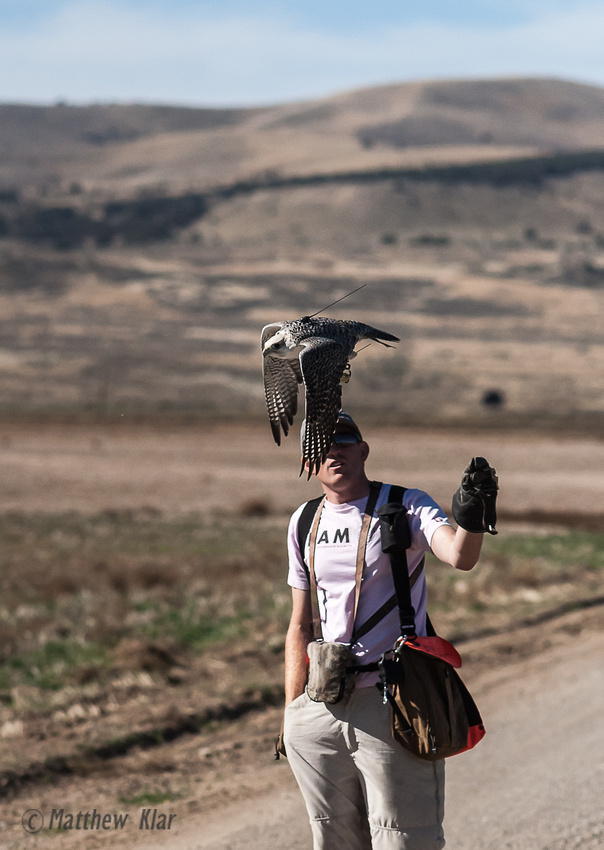 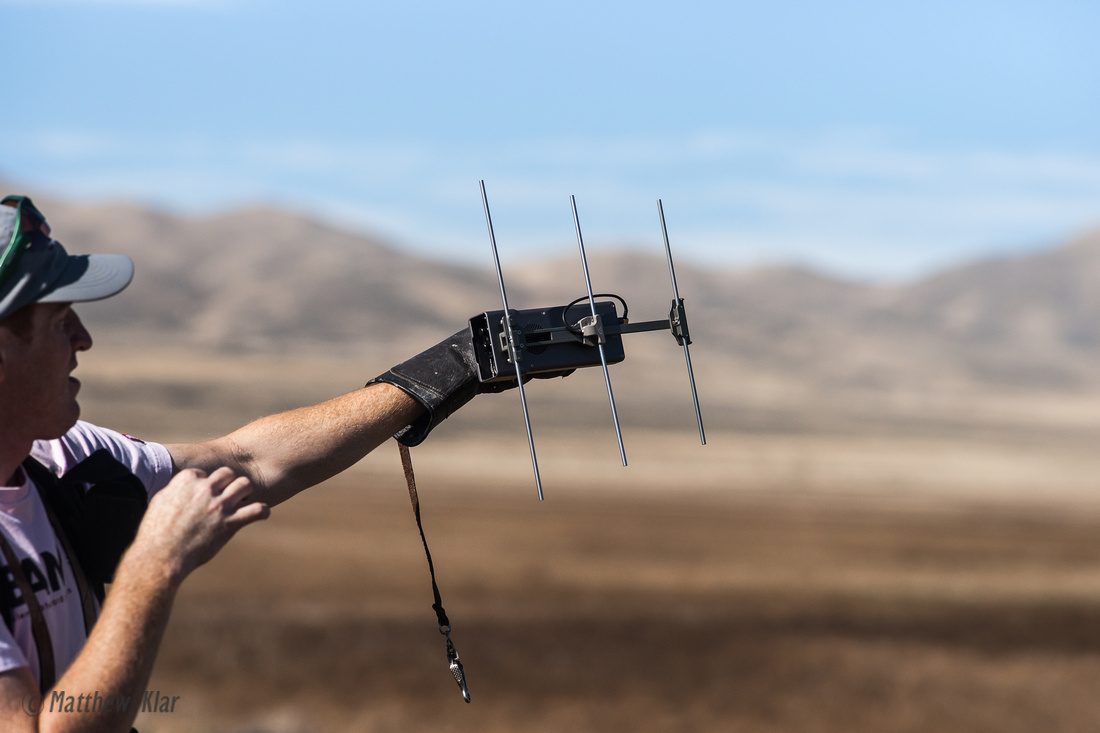 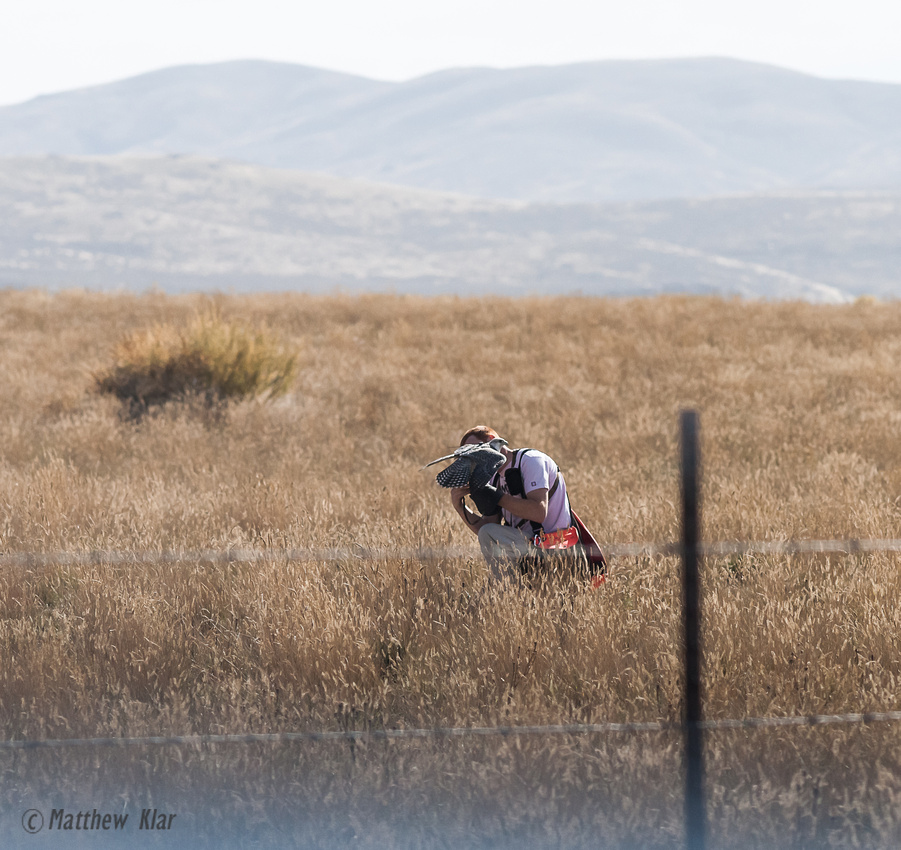 Quickly finding your hawk on the ground after it's caught game is equally important as they are most vulnerable on the ground -- you have to get there before the owls and coyotes do.  We'll have usually seen them strike at game and know about where they are, but remember that panorama of our favorite field? How easy would it be to zero in on the one sagebrush plant they're huddled under from 100 yards away?

And that's assuming they're just fine and eating away at their fresh kill.  What if they were in trouble?  Here's the aftermath of Tonks catching a jackrabbit and pulling it into a hole on top of her.  We were only about 50 yards away but quickly finding her with the telemetry was the only thing that kept her from suffocating: 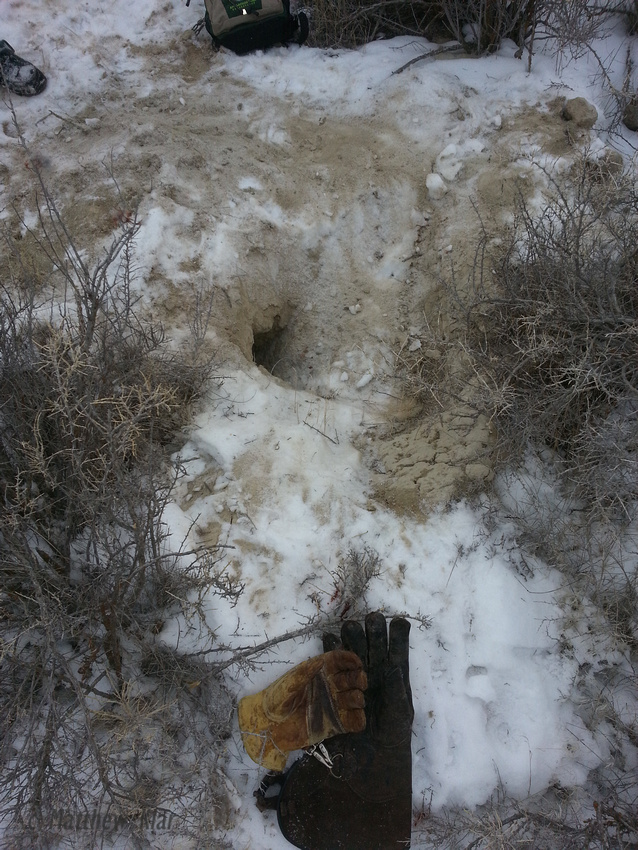 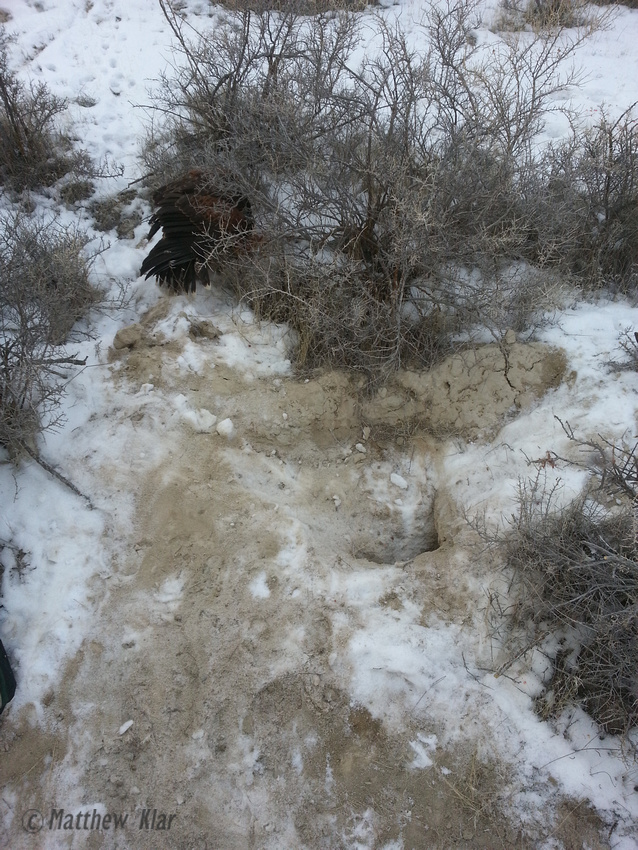 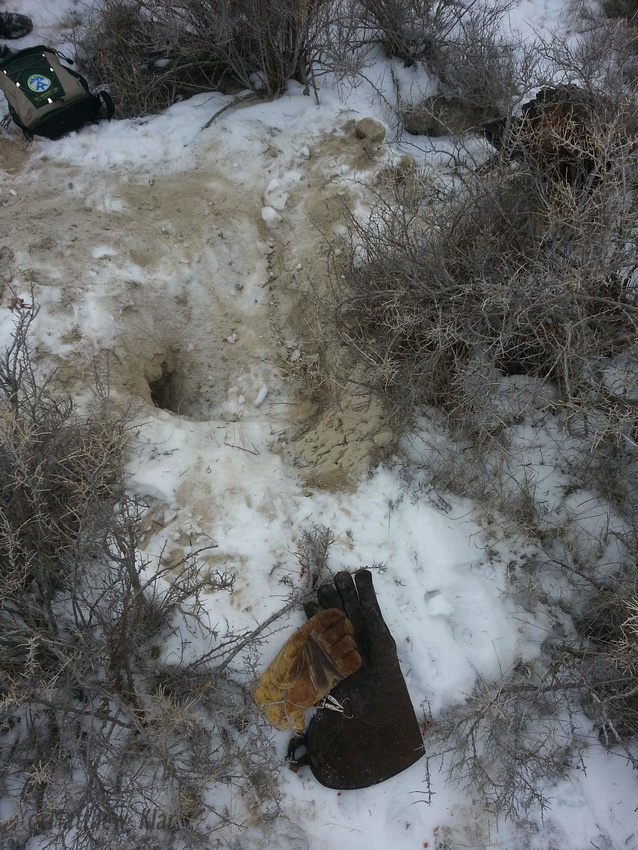 Here are two videos using telemetry to find the HAHAs quickly even though they're less than 100 yards away:

Bonus footage!   Here's the rest of the HAHA's post-swim hunt from last Sunday: